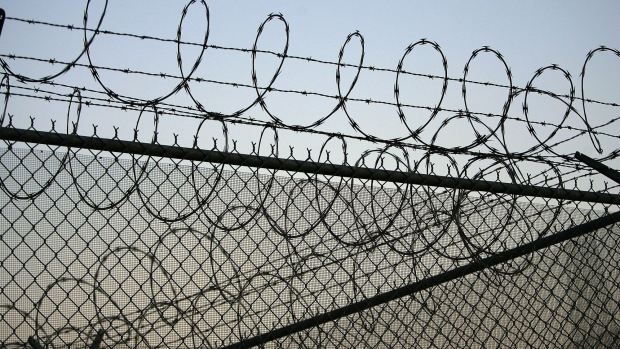 SANTA BARBARA, CA - JUNE 12: The Santa Barbara County Detention and Correctional Facility, one of two jails where singer Michael Jackson could be sent if the deliberating jury declares him guilty in his child molestation trial, is seen on June 12, 2005 in Santa Barbara, California. Jackson is charged in a 10-count indictment with molesting a boy, plying him with liquor and conspiring to commit child abduction, false imprisonment and extortion. (Photo by David McNew/Getty Images) , Photographer: David McNew/Getty Images North America

(Bloomberg) -- A Russian hacker who admitted to using malicious software known as NeverQuest to steal hundreds of thousands of dollars from online banking accounts was sentenced to four years in a U.S. prison.

Stanislov Lisov, 33, also known as “Black” or “Blackf,” pleaded guilty in February to conspiracy for using the malware to infect computers, steal login information for online banking accounts and drain the accounts of more than $800,000. He was extradited from Spain to New York in 2017. He had faced as much as five years in prison if convicted at trial.

According to prosecutors, NeverQuest has been used by hackers in attempts to steal millions of dollars out of bank accounts. The software makes it way onto computers through social media websites, phishing emails or file transfers. Once installed, it identifies when the user attempts to log onto a website and sends the credentials to servers used to administer the malware -- which hackers than can use to remotely control the subject computer, log on to bank accounts and transfer money, change credentials or purchase goods.

Lisov was responsible for creating and administrating a network of computers -- or a “botnet” -- that contained lists with about 1.7 million login credentials that included user names and passwords, from June 2012 to January 2015, prosecutors said. He also personally gathered login information from victims, they said.

Also on Thursday, federal prosecutors in Brooklyn unsealed a complaint charging a Lithuanian man, Vytautas Parfionovas, with money laundering and fraud for allegedly harvesting login information for online banking and brokerage accounts from 2011 to 2018 and using it to steal money. Parfionovas was arrested in Ukraine on Oct. 24 and extradited to the U.S. Thursday.

Prosecutors said Parfionovas and co-conspirators used several methods to steal the information. In one example, they allegedly obtained login information for email accounts, accessed the accounts and sent messages to financial advisers requesting wire transfers to overseas accounts. In May 2013, the conspirators got $50,000 from an investment account belonging to U.S. victims and directed the funds into accounts and then eventually to an individual in Kharkov, Ukraine.

According to prosecutors, Parfionovas and others also obtained information for securities brokerage accounts and used the accounts to steal money and make trades -- allowing them to make money while causing losses of more than $5.5 million.

An attorney for Parfionovas didn’t immediately respond to requests for comment.

To contact the editors responsible for this story: David Glovin at dglovin@bloomberg.net, Peter Blumberg, Joe Schneider