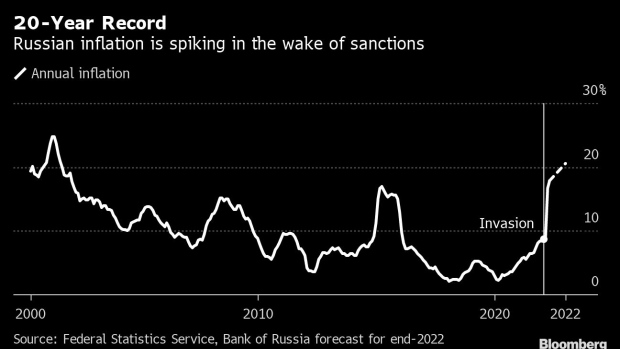 Price growth was 17.8% in April from a year earlier, the Federal Statistics Service said Friday. That was just below analyst estimates for 18%, according to a Bloomberg survey of 16 economists. The core rate, which excludes volatile components like fuel and produce, ran even higher at 20.4%.

Still, the Bank of Russia said this week that inflation, when adjusted for seasonal factors, has already peaked on a sequential basis now that the ruble has recovered its initial losses against the dollar and the panic buying that followed the imposition of sanctions in March faded. On a monthly basis, prices rose 1.6% in April, far below the 7.6% rise the previous month.

The central bank has already begun to unwind the emergency rate hike imposed in the immediate aftermath of the invasion, easing credit conditions as the economy heads into what may be the deepest contraction since the 1990s.

The Bank of Russia expects price growth to be 18%-23% in December from the year before.

Dmitry Polevoy, economist at Locko-Invest in Moscow, said price growth may remain elevated through the rest of the year. “A peak in annual terms around 20% is possible in the summer,” he said. “Risks remain from producer prices and shortages once inventories run out.”