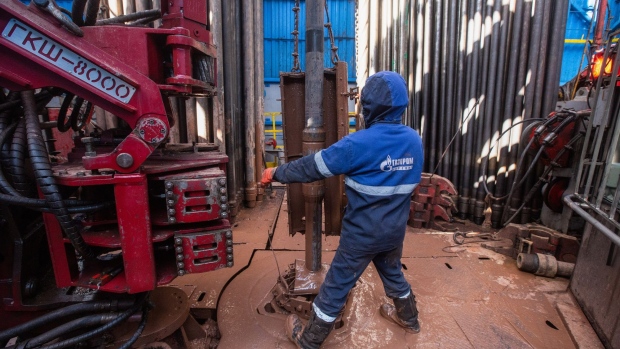 A worker fits drilling pipes at the Gazprom PJSC gas drilling rig in the Kovyktinskoye gas field, part of the Power of Siberia gas pipeline project, near Irkutsk, Russia, on Wednesday, April 7, 2021. Built by Russian energy giant Gazprom PJSC, the pipeline runs about 3,000 kilometers (1,864 miles) from the Chayandinskoye and Kovyktinskoye gas fields in the coldest part of Siberia to Blagoveshchensk, near the Chinese border. , Bloomberg

The producer is set to pay an additional 1.25 trillion rubles ($22.2 billion) in mineral extraction tax from September to November, or 416 billion rubles each month, according to a bill adopted by the lower house of parliament on Tuesday. It still requires approval from the upper chamber and the president.

European gas prices have more than doubled this year as Russia’s war in Ukraine -- and resulting international sanctions -- drive up risks to supply. Gazprom’s exports to its key markets have shrunk since March as some nations were cut off entirely while others saw flows through major pipelines curtailed.

Despite lower shipments, the Russian exporter has gained from surging prices. The windfall tax, once approved, will direct more of those proceeds to the government -- Gazprom’s largest shareholder -- rather than to all investors.

Last week, shareholders at the company’s annual meeting voted against a record dividend payout of 1.24 trillion rubles, deciding such a move would be “unreasonable” in the current environment, Deputy Chief Executive Officer Famil Sadygov said. Since the state owns just over 50% of Gazprom, the new tax would be twice as lucrative for the budget than the proposed dividend.

“Of course, we must be ready to fulfill our obligations to pay taxes in an increased amount,” Sadygov said last week, adding that Gazprom’s priorities include expanding its domestic network and preparing for the winter season.