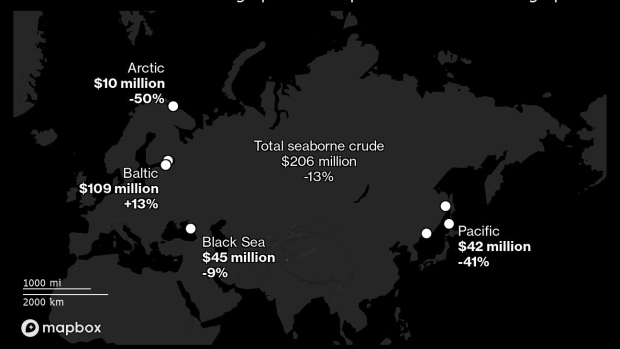 (Bloomberg) -- While Asia is still snapping up cheap Russian oil from ports that normally deliver to Europe, customers appear to be backing away from cargoes on Russian-owned vessels. That’s undermined flows from Pacific Ocean terminals, cutting nationwide shipments.

Seaborne exports of the nation’s crude fell back in the seven days to April 29 compared with the previous week, even as the volume shipped to Asia from ports on the Black Sea, Baltic and Arctic coasts soared.

A total of 34 tankers loaded about 24.8 million barrels from Russian export terminals, according to vessel-tracking data and port agent reports collated by Bloomberg. That put average seaborne crude flows at 3.55 million barrels a day, down by 14% against the week ended April 22.

The drop in exports means less revenue for Moscow as President Vladimir Putin continues his war in Ukraine, while the EU edges closer to sanctions on Russian oil, although it remains unclear what would be covered. At current rates of crude oil export duty, the week’s shipments will have earned the Kremlin about $206 million; that’s $32 million less than the previous week.

Russia exports crude from four main areas: the Baltic Sea in northwest Europe, the Black Sea, the Arctic, and terminals on its Pacific Coast.

The weekly shipment figures can swing depending on the timing of when tankers depart, which is also heavily influenced by the weather at ports -- as has been the case for the past several weeks.

Flows of Urals and Siberian Light crude from terminals in the Baltic and Black Sea over the same period rose by 130,000 barrels a day, or 5%. A drop in the volume of crude leaving the Black Sea port of Novorossiysk was more than offset by a jump in shipments from the Baltic ports of Primorsk and Ust-Luga.

The European Union is set to propose a ban on Russian oil by the end of the year, with restrictions on imports introduced gradually until then, although EU member Hungary continues to voice its opposition to the move and Slovakia says it would demand an exemption. Russia has failed for a second month to publish official oil production data.

Self-sanctions have had little impact on Moscow’s earnings from crude exports so far. The Kremlin received $866 million from export duty revenues in the four weeks to April 29, according to Bloomberg calculations using dtaa from the Ministry of Finance and vessel tracking. That’s up by 30% from the previous four-week period, to April 1.

While loading rates at ports in the Baltic and Black Sea held up at similar rates to the previous week, loadings were reduced significantly at terminals on the Pacific coast.

In the Black Sea, loadings from Novorossiysk were still running about six days behind schedule by the end of the week, with at least five cargoes scheduled for April pushed into May.

The following four charts show the destinations of crude cargoes from each of the four export regions. Destinations are based on where vessels signal they are heading at the time of writing, and some will almost certainly change as voyages progress.

There was a huge jump in the volume of crude on ships loading from the Baltic terminals at Primorsk and Ust-Luga showing destinations in Asia. Seven vessels are showing ports in India, China or Malaysia, with another two showing no clear destination.

One cargo that was scheduled to load at Primorsk during the week to April 29 appears to have slipped from the program, but most others are loading on schedule. Shipments from Ust-Luga ran to plan.

Seven tankers loaded at Novorossiysk in the Black Sea in the week to April 29, that’s down one on the previous week. Almost half of the crude loaded at the port is heading to Asia, in stark contrast to the weeks before the invasion of Ukraine when all cargoes remained in the Black Sea/Mediterranean region.

Just two ships loaded from floating storage facilities at Murmansk. One is heading to Rotterdam and the other to Lukoil’s refienry in Sicily.

Crude shipments from Russia’s three eastern oil terminals during the week to April 29 fell to their lowest level in 11 weeks. The slump may be related to buyers’ unwillingness to have cargoes delivered on Russian-owned vessels.

Shipments from the oil project on Sakhalin Island are made in shuttle tankers belonging to Russian-owned tanker company Sovcomflot PJSC, but sanctions on the company appear to be having an impact. The first non-Russian tanker arrived at Prigorodnoye on Sakhalin Island and loaded a cargo at the start of May, while three Sovcomflot tankers have been anchored off the oil terminal at De Kastri, which handles Sokol crude from the Sakhalin 1 project, for as many as 15 days. The final 2 cargoes from Sokol’s April loading program were not shipped.

Ten ships headed to Asia, including the UAE, from Russia’s western ports in the week to April 29. Another two left without signaling a clear final destination.

Of those ten vessels, six are heading to India, two to China and one each to Malaysia and the UEA, although some of those destinations may change. The two flagged as having unknown destinations are both signaling points in the Mediterranean that are unlikely to be their discharge ports.

Ship-to-ship transfers of Russian crude are continuing as more cargoes move long distances to Asia. The area off the port of Ceuta, just south of Gibraltar, has become a popular site for such transfers.

Four ship-to-ship cargo transfers were completed in the week to April 29, with the Elandra Denali and Elandra Everest both completing loading operations. The two VLCCs are now heading south along the west coast of Africa. The Searacer, which previously completed STS transfers off Ceuta, has now rounded the southern tip of Africa and changed its destination signal from Saldahna Bay to Fujairah in the United Arab Emirates.

Vitol, which owns the Elandra Denali and Elandra Everest, has said that is will stop trading Russian crude and refined products by the end of the year, with volumes set to “diminish significantly in the second quarter as current term contractual obligations decline.”

The Suezmax tanker Matala delivered its cargo of Arctic Blend crude from Murmansk to the Indian port of Paradip during the week.