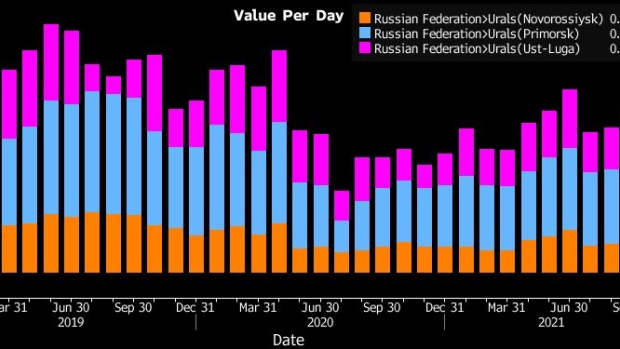 (Bloomberg) -- The discount at which Russia’s flagship crude trades in the global oil market is deepening amid a surprise increase in exports and competitive prices for supplies from Iraq.

Historically, Russia’s Urals oil has tended to trade at a discount to Dated Brent, a benchmark for crudes from the North Sea and beyond. Urals from the Baltic Sea was offered at $2.35 a barrel below the marker on Tuesday on a price-discovery window hosted by S&P Global Platts. A week earlier, it was being bid at minus $1.05.

Traders say a steep rise in planned shipments for September loading, as well expectations of a large October export program contributed to the slump. Meanwhile, Iraq announced sharp price reductions for its European buyers, meaning Russian grades may face unexpected competition. Russia’s Finance Ministry said Wednesday it plans to reduce the export duty for crude and fuel oil in October to $62.80 a ton, down from $64.60 a ton, due to lower Urals prices.

Last week’s Urals-Brent discount was the strongest in seven months. The rally was driven in part by hefty supply outages in the Gulf of Mexico following Hurricane Ida and led to increased U.S. buying of Urals. There are tentative signs that those curbs could soon be easing, with Royal Dutch Shell Plc returning workers to a key production platform.

Russia’s crude oil and condensate output jumped in early September as some of the nation’s key producers ramped up in line with their OPEC+ quota and Gazprom PJSC recovered from a fire at a facility in West Siberia.

The nation pumped about 10.679 million barrels a day between September 1 and 13, according to data from the Energy Ministry’s CDU-TEK unit seen by Bloomberg. That’s 2.4% above August’s level.