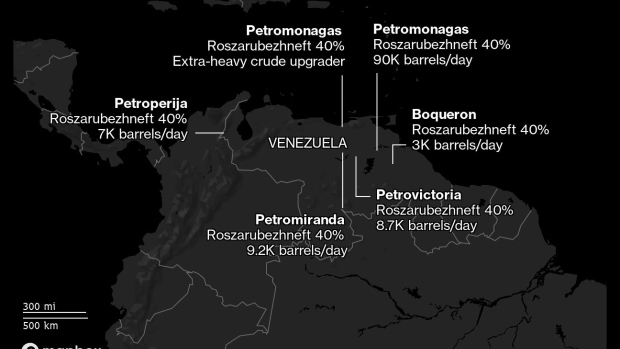 (Bloomberg) -- Much has been written about the hurdles to a U.S.-Venezuela detente that would allow oil from the South American nation to start flowing more freely into international markets. One of them, though, has been overlooked: The presence of a Kremlin-owned company in oil fields all across Venezuela.

The company, called Roszarubezhneft, holds 40% stakes in five joint ventures with the Venezuelan state-run oil giant PDVSA. Together, they produce nearly 120,000 barrels a day of crude, or 15% of the country’s current output.

Economic sanctions that have isolated Vladimir Putin’s regime, including a U.S. and U.K. ban on fossil fuel imports, following the invasion of Ukraine have pushed crude prices over $100 a barrel and sparked a scramble to find new supplies to replace Russian crude. The Biden administration sent an envoy to Caracas last weekend, breaking with a U.S. policy that for years refused to recognize Nicolas Maduro’s government, to discuss a possible waiver of some of the sanctions that have crippled Venezuela’s ability to export oil.

The U.S is willing to relax economic pressure on Venezuela depending on the outcome of upcoming talks between Maduro and the opposition, a senior Biden administration official said. That indicates President Joe Biden wants to see progress toward restoring democratic governance before allowing Venezuela to increase oil exports.

Maduro appears to be warming to the U.S., once a major importer of Venezuelan crude. Days after hosting the meeting in Caracas, he released former Citgo executive Gustavo Cardenas, a U.S. citizen, and Jorge Fernandez, a Cuban-American. The Venezuelan leader also said that formal talks with the opposition, which began last year in Mexico and have have been suspended for months, should be reconsidered.

Russian companies boosted their presence in the country after late firebrand Hugo Chavez and Putin struck agreements in 2010 as part of Venezuela’s pivot toward Russia and China. The new allies filled the void left by a worsening relationship with Washington, providing military equipment, loans and investment in the oil industry.

At the height of Russia’s presence in the country, Rosneft, Gazprom PJSC and Lukoil PJSC were among the handful of firms that held stakes in oil fields and a heavy-crude upgrader facility on the country’s Caribbean coast.

Russia’s biggest oil company, Rosneft, invested more than $7 billion in loans to PDVSA and operations in five onshore ventures, and was also awarded two offshore gas operations. Since then, Venezuela has paid back its debt.

Dealing with PDVSA has come at a cost. One of Rosneft’s trading firms was sanctioned in 2020 by the U.S. for maintaining ties with Maduro and PDVSA. To prevent additional damage, Rosneft sold all assets to Roszarubezhneft. And like other international oil majors, Russia’s ventures have diminished their output due to PDVSA’s lack of financing, maintenance and an exodus of qualified personnel.

The country’s oil industry has mounted a surprising, if modest, rebound since 2020, though its total output of about 800,000 barrels a day is a fraction of the more than 3 million barrels that once made it an energy giant. Energy analysts estimate the industry can further boost production if oil can flow freely and the country is able to import much-needed parts and equipment.

But the U.S. and Venezuela appear far from any agreement that would allow for widespread sanctions relief. On Thursday, White House press secretary Jen Psaki downplayed the likelihood of an agreement on oil imports coming any time soon. The same day, Venezuela Vice President Delcy Rodriguez met with Russian Foreign Minister Sergei Lavrov in Turkey to review bilateral relations.

Just how the U.S. would deal with the issue that some of Venezuela’s oil is pumped with the help of Russia is not clear.