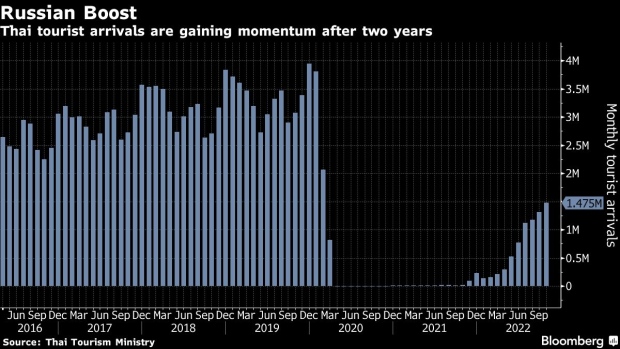 An information booth displays a sign in Russian language in Patong town in Phuket, earlier in Sept. , Photographer: Andre Malerba/Bloomberg

(Bloomberg) -- Russian tourists are once again traveling in large numbers to Thailand via chartered flights and using credit cards issued outside the country to get around payment difficulties, turbo-charging a gradual tourism recovery in the Southeast Asian nation.

More than 44,000 Russians visited Thailand in October, compared with less than 10,000 each in the months following the start of the war in Ukraine in February, according to data from the Ministry of Tourism and Sports. The resumption of direct flights between Moscow and Phuket from the end of last month will lure more tourists, according to Thai officials.

Chartered flights operated by airlines such as Azur Air and commercial flights from flag carrier Aeroflot PJSC have been bringing people from Moscow, Novosibirsk and Vladivostok to Bangkok and popular beach destinations such as Pattaya and Phuket, according to the Phuket Tourist Association.

Around 20% in every 10,000 foreign visitors taking direct flights to Phuket are Russians, Bhummikitti said. The resort island is known for its pristine beaches and national parks.

That’s in sharp contrast to nearly the complete absence of Russians for about six months after airlines were forced to halt flights and tourists found it difficult to make payments following the suspension of most Russian banks from the SWIFT payment system and a plunge in the ruble.

In the absence of Chinese travelers, the largest group of visitors to Thailand before the pandemic, the return of Russian tourists is seen accelerating a recovery in the nation’s tourism industry. And that’s key to keeping an economic recovery on track amid growing risks to its trade from a global slowdown.

Russians, whose average length of stay is at least 12 days in Phuket, are using credit cards issued in other countries and cash to pay for trips and shopping, said Bhummikitti. Most financial transactions are settled in Dubai and other destinations in the Middle East, said Thanet Supornsahasrangsi, president of the Tourism Council of Chon Buri.

Pattaya, a popular beach town some 150 kilometers east of Bangkok, is set to see a rush of tourists in the coming months based on advance bookings, according to Thanet.

More than 147,000 Russian tourists arrived in Thailand during the first 10 months of this year. But that’s only about a 10th of the 1.5 million who traveled to the country in 2019 and spent $3.3 billion, becoming the third-highest spenders, according to official data.

Thailand expects to welcome more than 20 million visitors next year, double this year but only about 50% of pre-pandemic arrivals.