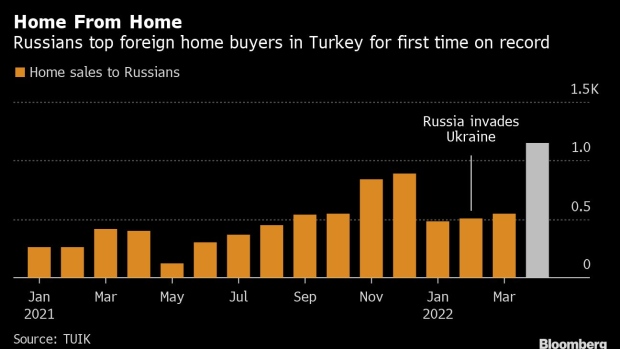 (Bloomberg) -- Russians topped Turkey’s ranking of foreign home buyers for the first time, the latest sign of the country’s appeal for capital fleeing sanctions over Moscow’s invasion of Ukraine.

Sales to Russians more than doubled month-on-month to 1,152 units in April, overtaking purchases by Iranian and Iraqi citizens, according to data from the Turkish statistics office that go back to January 2015.

Turkey hasn’t joined the US and EU in imposing sanctions on Moscow, reluctant to burn its bridges with Russian President Vladimir Putin. That’s attracted oligarchs’ yachts trying to avoid potential seizure in Europe, and created opportunities for Turkish companies to fill the gap left by western firms exiting Russia.

Dubai and Israel have also emerged as popular destinations for Russian property buyers since the start of the war.

Last week Turkey raised the threshold foreigners must invest in property to become eligible for citizenship to $400,000, up from $250,000.