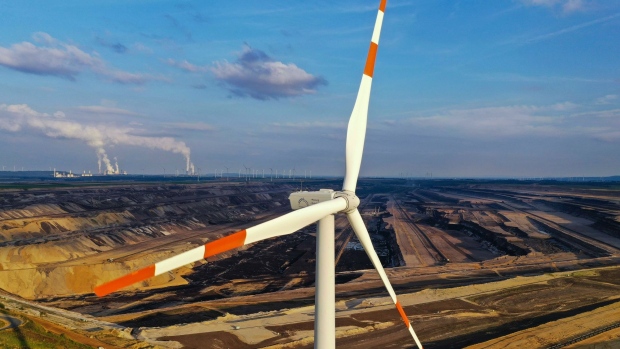 (Bloomberg) -- Germany’s RWE AG has turned to the debt market for funding, as Europe faces its worst energy crunch in decades.

The company saw over 2 billion euros ($2 billion) of investor demand for at least 500 million euros of three-year bonds on Wednesday, according to a person familiar with the matter, who asked not to be identified as they aren’t authorized to speak publicly. It’s RWE’s first venture into Europe’s debt market since May and adds to the region’s busiest day for new deals in two months.

The bond offering is the first from a German power provider since Europe’s energy crisis deepened this summer. The region is bracing for possible power shortages later this year, with some companies considering rationing supplies to ensure essential demand can be met. In Germany, power prices surged above 500 euros for the first time on Tuesday, ratcheting up pressure on households and businesses as Russia tightened its grip on the region’s gas supply.

While RWE’s bond proceeds are earmarked for general corporate purposes, the company said last week that it plans to boost investment in renewable energy capacity to make Europe more energy independent. Alongside Uniper SE, it also struck a deal with the German government to import liquefied natural gas through two new terminals in an effort to alleviate the energy crunch.

The deal is adding to the busiest day for sales in Europe’s debt markets since June 23, according to data compiled by Bloomberg. Nine borrowers, including Lloyds Banking Group Plc and Nordea Bank Abp are offering at least 4.85 billion euros of new bonds on Wednesday, marking a nascent revival after the slowest summer in at least eight years.

Extreme hot weather has exposed flaws in England’s water system, which could make it harder for the country’s privatized utilities to borrow money on the public debt markets.

Chinese high-yield dollar bonds posted their biggest gains since March, with some large developers soaring on news that authorities are planning to help them raise financing.

Citrix Systems Inc. bankers are doing whatever it takes to get one of the biggest buyout financings of the past decade off their books, pitching investors a revised $15 billion deal to help limit potential losses.