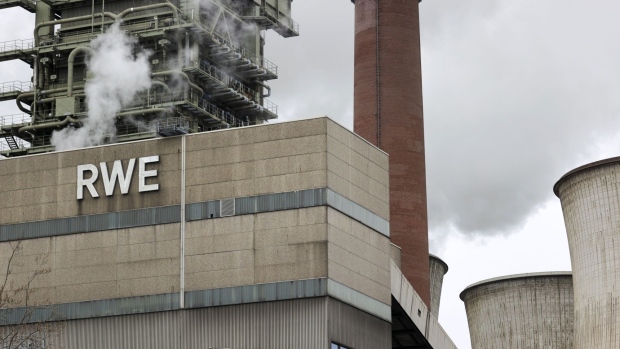 The Neurath lignite fueled power station, operated by RWE AG, in Grevenbroich, Germany, on Friday, April 8, 2022. Germany's Economy Minister Robert Habeck last week said the country has already cut its reliance on Russian coal by at least half in the past month as the European Union agreed to ban imports of the fuel from Russia. Photographer: Alex Kraus/Bloomberg , Bloomberg

Germany’s biggest power producer plans to spend more than 5 billion euros ($5.2 billion), on green technologies this fiscal year, including wind, solar and batteries, as well as ramping up hydrogen, it said in a statement on Wednesday. That’s about 30% more than first planned.

Europe is rushing to boost energy supplies ahead of winter as it looks to stave off a crisis that’s could result in blackouts and rationing. Governments and politicians in Brussels have also been focusing on reducing consumption as flows of natural gas from Russia have dwindled and electricity prices have jumped to records.

“All this is urgently needed in order to make energy supply more independent and climate-neutral,” RWE Chief Executive Officer Markus Krebber said in the statement.

The company’s financial exposure to Russia has been fully removed as it wrote off 748 million euros -- less than what was estimated earlier --related to a long-term contract to buy hard coal.

RWE also has “no intention to claim losses from shortfall of Russian gas supply” via a government mechanism that could be activated soon, it said.

The company still formally has a supply contract -- which, as of February, covered 15 terawatt-hours of Russian gas through the end of 2023 -- but it’s “reduced the associated risk to zero by concluding hedges,” according to the report. RWE is now evaluating potential legal actions given Russia’s gas cuts, Krebber told reporters on Thursday.

Just like its European peers, RWE has been racing to secure alternatives to Russian fuel and add more infrastructure to import liquefied natural gas from across the globe. The company signed a 15-year agreement for US LNG in May, and deliveries are expected to start in 2027, according to a presentation.

The company, which has already boosted its LNG trade, sees its Brunsbuettel floating import facility in Germany starting in December, which should help the nation this winter after Russia slashed pipeline gas flows to multiyear lows.

European energy prices have also surged recently as a climate crisis curtailed shipments along the Rhine River. In Germany, where most of RWE’s run-of-river power plants are located, water volumes “remained below the long-term average,” it said.

Still, the company confirmed its full-year outlook, after raising it last month, as well as higher profits in the first half. Adjusted earnings before interest, taxes, depreciation and amortization -- also pre-released earlier -- jumped 63% to 2.9 billion euros.

“RWE benefits from the higher commodity price and volatility environment, an increased opportunity on renewables development, while having limited direct exposure to the Russian gas shortage,” JPMorgan analyst Vincent Ayral said in a note. The utility has also hinted at a coming guidance upgrade for 2023. “Yet, this will happen at a later stage given current uncertainty,” he said.