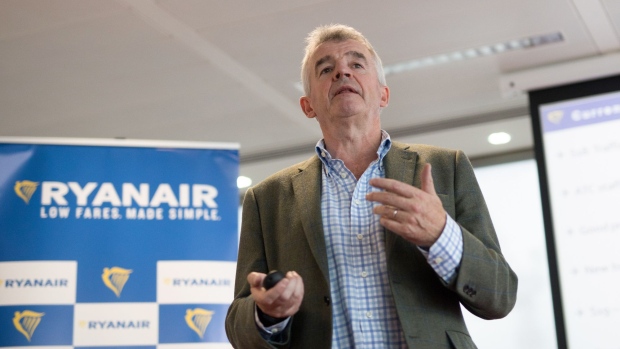 Michael O'Leary, chief executive officer of Ryanair Holdings Plc, gestures while speaking during a news conference in London, U.K., on Wednesday, Sept. 12, 2018. O'Leary told the news conference that he won't "roll over" in the face of unreasonable demands, while pledging to work to avoid walkouts wherever possible. , Bloomberg

In a video message to staff seen by Bloomberg, O’Leary said the carrier has an excess of more than 500 pilots and about 400 flight attendants right now, and on top of that will need around 600 fewer people in those categories by next summer. A spokesman for Ryanair confirmed the video’s authenticity and declined to comment further.

“We over the next couple of weeks will be doing our very best to minimize job losses, but some are unavoidable at this time,” O’Leary said. The Dublin-based carrier had already warned it would close some European bases and shrink others in response to the Max crisis, which has stalled a fleet upgrade, and concerns around Brexit, without indicating how many positions might go.

Ryanair posted the video Monday after announcing a 21% drop in quarterly earnings hurt by higher fuel costs, faltering economies and a fare war. In the address, an apologetic O’Leary tells staff that redundancies will be detailed by the end of August once the carrier has engaged with airports and unions, with cuts to be enforced in September and October and again after Christmas.

The high number of excess staff is in part due to a reduced level of employee churn, which the CEO described as having “dried up to effectively zero” in the wake of improved pay deals triggered by a unionization drive.

Ryanair indicated on July 16 that it would trim operations, saying it expected to get no more than 30 of the 58 Max jets due from Boeing by next summer. The upgraded version of the 737 workhorse was idled and deliveries halted following two fatal crashes in less than five months.

To contact the editors responsible for this story: Kenneth Wong at kwong11@bloomberg.net, Christopher Jasper