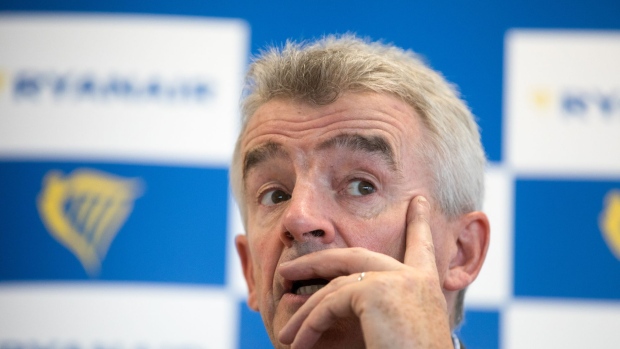 Measures including a return to lockdown conditions in Austria mean airlines face a fraught period through Christmas as they wait to see whether a resurgence in demand will be strangled off, O’Leary said Tuesday in a webinar broadcast by Eurocontrol, criticizing the curbs as illogical.

Bookings for vacations next summer could also be affected, and there’s a possibility that the U.S. will review the reopening of its borders, he said in the most downbeat take on prospects from an airline chief since lockdown worries began to weigh on airline stocks Friday.

“It’s inevitable that we will undermine confidence between now and Christmas and that will disrupt Christmas and it will also unsettle people between Christmas and New Year, when they normally start booking their summer holidays,” he said, adding that until last week “things were going great.”

Europe has quickly become the global epicenter of the Covid-19 outbreak, prompting governments to resort to a fresh round of clampdowns. German Chancellor Angela Merkel said Monday that the latest surge in infections is the worst of the pandemic and called on federal states to tighten restrictions -- just days after Austria announced a fourth lockdown. The measures have triggered unrest in countries including the Netherlands, where police fired warning shots and deployed a water canon to contain protests.

The deterioration comes with the aviation industry only just beginning to recover after the virus grounded flights for months, leading carriers to slash jobs, retire fleets and load up with debt just to survive. Subsequent travel restrictions made for a sluggish resumption of demand on international routes, with European operators enjoying only a short period of strong bookings in the second part of the summer and during October’s school holidays.

O’Leary said governments are panicking and that new restrictions should apply only to the unvaccinated, with the principle of free movement within the European Union upheld by member states.

The CEO said there’s a chance that a rebound in North Atlantic travel could go backwards if events in Europe prompt a “jumpy” Biden administration to reconsider a reopening of U.S. borders that took effect on Nov. 8. Ryanair’s own business wouldn’t be impacted by such a development since it operates only short-haul flights.

O’Leary’s view contrasts with that of Virgin Atlantic Airways Ltd. counterpart Shai Weiss, who said Monday he doesn’t personally expect a tightening of the U.S. or U.K. borders, since the Covid flareup in mainland Europe stems mainly from the slow takeup of booster shots rather than a new viral threat.

“Cases are no longer the determining factor,” Weiss said. “It’s really about variants of concern that are new and dominant beyond the delta variant, and we haven’t see one.” He said Virgin is set for a bumper Thanksgiving and Christmas but can’t predict how strong demand will be next summer, with most bookings coming no more than a few of months in advance of flying.