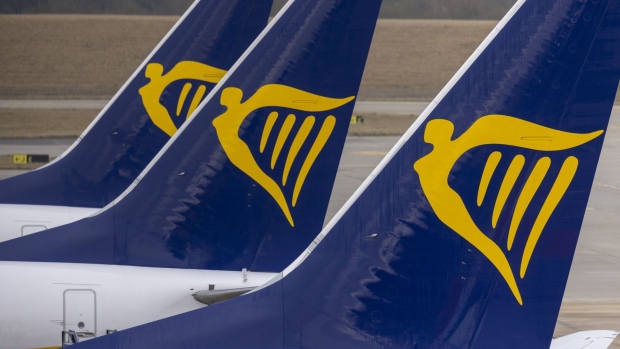 The tail fins of passenger aircraft, operated by Ryanair Holdings Plc, on the tarmac at London Stansted Airport, operated by Manchester Airport Plc, in Stansted, U.K., on Monday, Jan. 10, 2022. The U.K. will no longer require vaccinated travelers to take a Covid-19 test before boarding a flight to the country, after airlines hard-hit by the omicron variant lobbied for the rules to be eased. Photographer: Jason Alden/Bloomberg , Bloomberg

(Bloomberg) -- Ryanair Plc was slapped with a fine in Hungary over a windfall tax the airline’s Chief Executive Officer had called “beyond stupid.”

Hungary’s Consumer Protection Office levied a 300 million forint ($781,270) penalty for Ryanair’s decision to pass on the cost of the tax to its customers, Justice Minister Judit Varga said in a Facebook post on Monday. Ryanair said it would appeal.

Hungary’s government and Ryanair have been embroiled in a war of words since Prime Minister Viktor Orban’s cabinet levied in June what it calls an “extra profit tax” on industries ranging from energy to banking.

Airlines were hit with a departure fee as part of the new taxes announced in June that were aimed at plugging budget holes following record pre-election spending and to subsidize soaring energy costs.

Ryanair CEO Michael O’Leary has said it was “beyond stupid” to levy such a tax on airlines just as they were recovering from losses inflicted by the Covid-19 pandemic. Varga, the justice minister, said Hungary would launch probes and issue fines in “all cases” where companies deflected the levy onto their customers.

Hungary’s fine was “baseless” and Ryanair is ready to appeal it all the way to European Union courts if necessary, the airline said in a statement. It added that it has yet to receive official notification of the penalty.