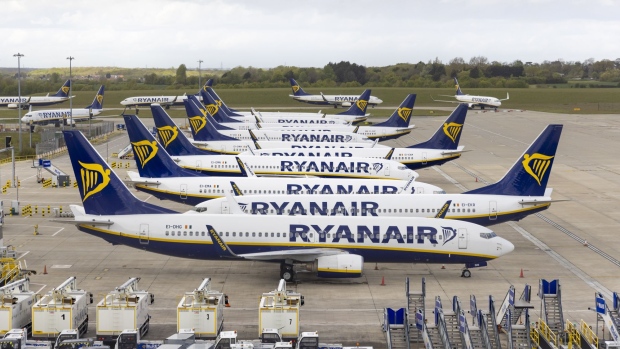 (Bloomberg) -- Ryanair Holdings Plc said strong demand across Europe and the UK drove its best ever sales last weekend as people continue to plan summer getaways despite the surging cost of living.

Passenger bookings at Europe’s biggest discount airline exceeded 2 million, surpassing the previous record set in 2019 by 400,000 or 25%, Chief Executive Officer Michael O’Leary said Tuesday in a London briefing where he unveiled an expanded timetable of UK flights for the coming summer.

The booking tally for the week as a whole exceeded 4.95 million and a figure of 5 million is anticipated for next week as Europeans ramp up spending on low-cost travel despite rampant inflation and a slowing economy. Fares remain buoyant after rising last year and will likely show a further high single-digit percentage gain, from an average €50 ($54) in 2022 to around €53-€55.

“There just seems to be very strong demand out there,” O’Leary said. “And people I think are worrying that prices are going to rise this summer, which they will, and getting in early and booking their travel.” Demand this winter has been strong enough and capacity sufficiently limited for Ryanair to fill planes without restorting to “9.99 seats,” he said.

Bookings have picked up particularly well in the UK in recent days and weeks, O’Leary said. Ryanair plans to base 57 jets across London’s Stansted, Gatwick and Luton airports this summer, offering around 180 destinations, six more than last year, and in excess of 300,000 flights, or 10% higher.

The Irish carrier will station 115 aircraft in Britain as a whole, with provincial demand even stronger than from London and the southeast, the CEO said.

O’Leary said that the situation regarding delayed deliveries of new Boeing Co. 737 Max planes is easing, with 45 of 51 pending aircraft now expected before May, ready for deployment in time for the summer peak.

Ryanair expects to ferry 185 million passengers in the year through March 2024, after 168 million this fiscal year, O’Leary reiterated.