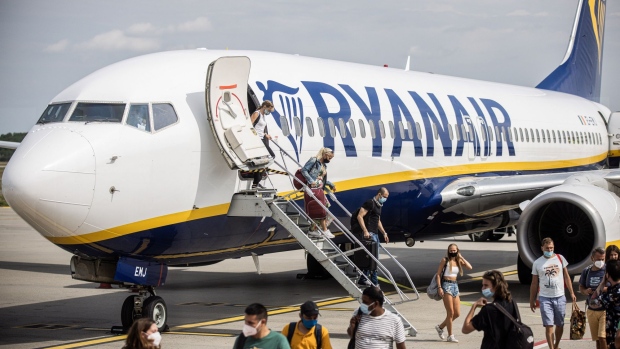 Michael O'Leary, chief executive officer of Ryanair Holdings Plc, at the A4e Aviation Summit in Brussels, Belgium, on Thursday, March 31, 2022. Europe's biggest discount airline expects to return to profitability and reach a goal of carrying 165 million passengers in the 12 months from April 1, provided there’s no major coronavirus flareup and disruption from the war in Ukraine is contained, O'Leary said. , Bloomberg

(Bloomberg) -- Air fares are “too cheap” and will need to rise for the next five years for airlines to remain competitive, Ryanair Chief Executive Officer Michael O’Leary told the Financial Times in an interview.

Ryanair under O’Leary pioneered the era of budget travel, offering cheap tickets that made air travel accessible to millions, while putting pressure on the profit margins of full-service carriers. Now rising oil prices and higher environmental charges would push the cost of an average Ryanair ticket to between 50 and 60 euros ($52 to $62) from 40 euros, he told the newspaper.

“It has been my doing. I made a lot of money doing it,” he told the FT. “But ultimately, I don’t believe air travel is sustainable over the medium term at an average fare of €40. It’s too cheap at that.”

Oil prices will likely remain high because it will take a few years before “we can wean ourselves off Russian oil and gas,” he said.

The Irish airline’s fuel costs should be stable at least for the rest of the year because it had hedged the majority of its future fuel at $65 per barrel, he said. The price of a barrel of crude has been hovering near $110 a barrel.