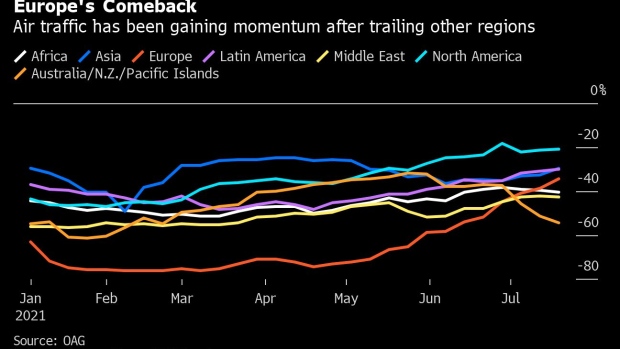 (Bloomberg) -- Ryanair Holdings Plc said it aims to halt losses this fiscal year as the easing of coronavirus curbs spurs a surge in summer flights to European beaches.

The region’s biggest discount carrier should break even or post a small loss for the 12 months ending next March, assuming vaccine rollouts remain capable of containing the pandemic, it said in a statement Monday. The Dublin-based firm’s first-quarter loss widened to 273 million euros ($322 million).

Ryanair has been ramping up capacity as it seeks to tap pent-up demand and win market share amid an easing of travel restrictions within the European Union. In its latest update company said passenger numbers should exceed 90 million in fiscal 2022, after previously predicting that they’d be at the lower end of an 80 million to 120 million range.

“We would hope in Q2 that we make a profit,” Chief Financial Officer Neil Sorahan said in a phone interview. “A lot will depend on how that final outcome is, but we have a lot of hopes as we get into the autumn as well. Germany and central and Eastern Europe have been very strong.”

Ryanair’s loss for the three months through June widened from 185 million euros a year earlier as it sought to tap Easter traffic that failed to materialize.

The carrier said this month it would hire 2,000 pilots over the next three years to fly 210 new Boeing Co. 737 Max jets that it began taking in June.