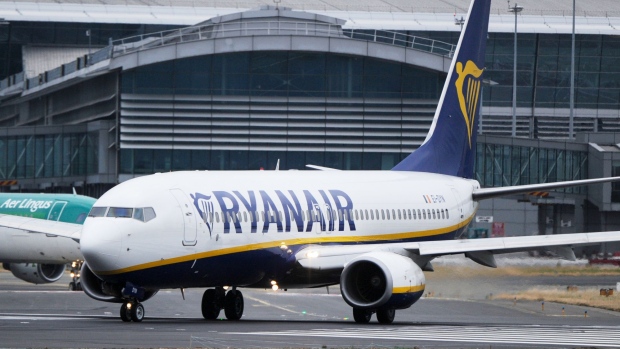 A passenger aircraft operated by Ryanair Holdings Plc taxis on the tarmac at Dublin Airport in Dublin, Ireland, on Thursday, July 12, 2018. Ryanair grounded dozens of flights Thursday as pilots in its Irish home market walked out after failing to agree new contracts as part of a move toward unionization at the discount giant. Photographer: Aidan Crawley/Bloomberg , Bloomberg

(Bloomberg) -- Ryanair Holdings Plc said it will hire an additional 200 cabin crew in Ireland as it gears up for a surge in demand this summer.

The Irish low-cost carrier, which has been touting extremely strong demand for travel this summer, said that it will organize a mass recruitment event this month at its headquarters near Dublin.

Ryanair has said people are continuing to plan summer getaways despite rampant inflation and a slowing economy across Europe. Summer is crucial for the European aviation industry as that is when airlines typically make most of their money for the rest of the year.

The aviation industry is ramping up hiring after last summer saw long lines and mass cancellations, as airlines and airports struggled to cope with a resurgence in travel following the pandemic. Dublin Airport saw chaos over several weekends in Summer 2022, when a shortage of security staff led to long lines of travelers waiting to get into terminal buildings and thousands missing their flights.