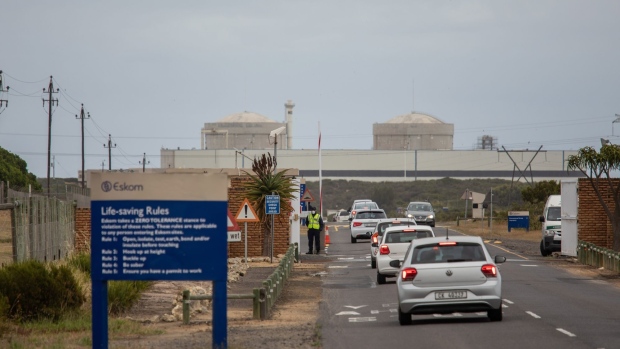 Automobiles drive through the security gates at the entrance to the Koeberg nuclear power station, operated by Eskom Holdings SOC Ltd., in Cape Town, South Africa, on Wednesday, Nov. 25, 2020. The decision to begin installing new steam generators at the Koeberg plant near Cape Town underscores state-owned Eskom’s confidence that it will win approval to prolong production of low-emissions nuclear power into the middle of the century. , Bloomberg

(Bloomberg) -- Eskom Holdings SOC Ltd., which supplies almost all of South Africa’s power, will take two of the continent’s largest generating units offline this year for maintenance, increasing the risk of power cuts after the nation had record outages in 2021.

The extended unavailability of the units with capacity of 920 megawatts each due to the “planned long outages does mean the electricity supply system may be under additional strain during the coming year,” Eskom said in statement on its Twitter account.

Unit 2 of the Cape Town nuclear power station will be taken offline for five months from Jan. 17 for refueling and maintenance, which will include the replacement of three steam generators, Eskom said. That will be followed by maintenance at unit 1 over a similar time period, it said.

This comes as Africa’s most industrialized economy experienced record outages last year. The nation’s energy supply has been patchy since 2005, with the loss-making Eskom struggling to keep pace with demand.

“This is going to be a long, but needed outage -- the first of its kind for Koeberg. Our staff are prepared and committed to make history by ensuring success of this project,” Riedewaan Bakardien, Eskom’s Chief Nuclear Officer, said.