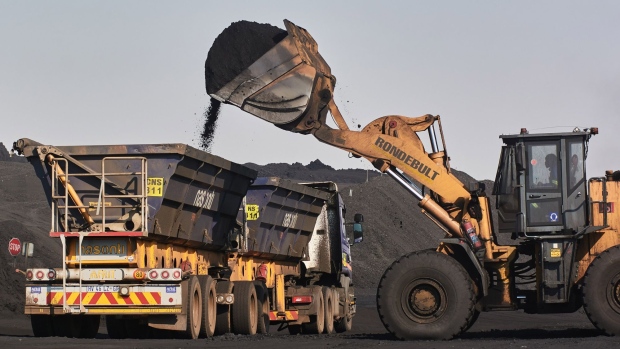 A truck is loaded with coal at the Mafube open-cast coal mine, operated by Exxaro Resources Ltd. and Thungela Resources Ltd., in Mpumalanga, South Africa on Friday, Sept. 9, 2022. South Africa relies on coal to generate more than 80% of its electricity, and has been subjected to intermittent outages since 2008 because state utility Eskom Holdings SOC Ltd. can't meet demand from its old and poorly maintained plants. , Bloomberg

(Bloomberg) -- South Africa’s government will seek cabinet approval for an $8.5 billion plan to transition away from the use of coal to generate electricity in order to secure funding from some of the world’s richest nation.

A second draft of the investment plan has been completed and is being shared with “key stakeholders” ahead of its submission to cabinet, said Vincent Magwenya, a spokesman for South African President Cyril Ramaphosa. The development marks a significant step toward completing the pact with the funding partners -- the UK, US, Germany, France and the European Union -- which was first announced at the COP26 international climate summit in Glasgow last year.

The plan “outlines the investments required to achieve South Africa’s ambitious climate targets,” Magwenya said in a response to a query. “The objective remains to complete this process by COP27,” which will take place in Egypt in November, he said.

South Africa’s landmark climate finance deal has been hailed as a prototype for helping other coal-dependent developing countries transition to cleaner energy, with Indonesia and Vietnam among nations in line for a similar deal. Its fate could have a knock-on effect at COP27, which is set to focus on the needs of poorer nations adapting to global warming.

The plan details how the money will be spent, with the investment partners focused on re-purposing coal-fired plants owned by state utility Eskom Holdings SOC Ltd. to produce renewable energy. South Africa is also pushing for support to develop green hydrogen and electric vehicle industries.

People familiar with the talks told Bloomberg News earlier that the plan had been submitted but declined to say what was in it as a public announcement hadn’t been made.

The talks over the funding deal have become bogged down in recent weeks with John Kerry, the US special presidential envoy for climate, calling for President Ramaphosa to advance the deal and South African Environment Minister, Barbara Creecy, bemoaning its complexity.

South Africa depends on coal for more than 80% of its electricity and is the world’s 13th biggest source of climate-warming greenhouse gases.