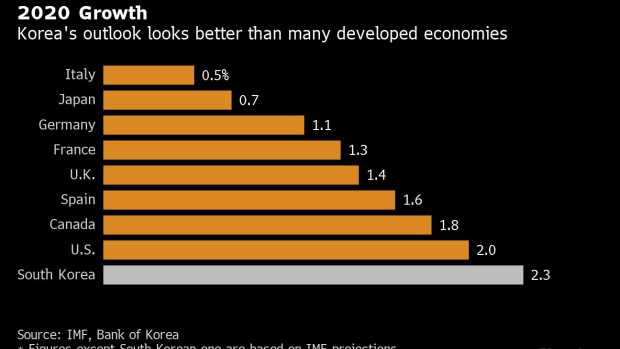 (Bloomberg) -- Sign up here to receive the Davos Diary, a special daily newsletter that will run from Jan. 20-24.

South Korea’s economy expanded at a much faster pace than expected in the fourth quarter, supporting optimism that a recovery may be under way for the Asian bellwether of global demand.

Gross domestic product increased 1.2% from the previous quarter, the fastest pace since the third quarter of 2017, a Bank of Korea statement showed Wednesday. Economists had forecast a 0.7% expansion.

“Looking ahead, we forecast GDP growth of 2.3% in 2020, reflecting a gradual recovery in exports and investment. On the policy front, an expansionary fiscal stance will likely take the lead in supporting the economy. Our baseline expectation is for the Bank of Korea to stand pat in the year ahead.”

To contact the editors responsible for this story: Paul Jackson at pjackson53@bloomberg.net, Jiyeun Lee, Jason Clenfield