US stocks fell and Treasury yields climbed after the latest batch of economic data did little to dial back expectations for the Federal Reserve’s next move.

The S&P 500 extended declines to close at the lowest level since July 18. It ended just above 3,900, a level that has become a battle line for bulls and bears in recent months, acting as a support in mid-May and then keeping a lid on advances briefly in June and July. The tech-heavy Nasdaq 100 underperformed major indexes Thursday, with growth related stocks under pressure. Adobe Inc. tumbled after agreeing to buy software design startup Figma Inc. in a deal valued at about US$20 billion.

Treasury yields rose across the board, with the policy-sensitive two-year rate up as much as eight basis points at 3.87 per cent, the highest since 2007 after the latest data painted a mixed picture for the economy.

Swaps traders are currently pricing in a 75 basis-point hike when the Fed meets next week, with some wagers appearing for a full-point move. Bets ratcheted higher after a hot consumer inflation reading Tuesday, which also sparked the biggest selloff in stocks in two years.

“Data in hand mean the Fed is most likely to raise the fed funds target three-quarters of a percent at its decision next week,” said Bill Adams, chief economist at Comerica Bank. “A hike of a full percentage point is the month’s dark horse candidate.” 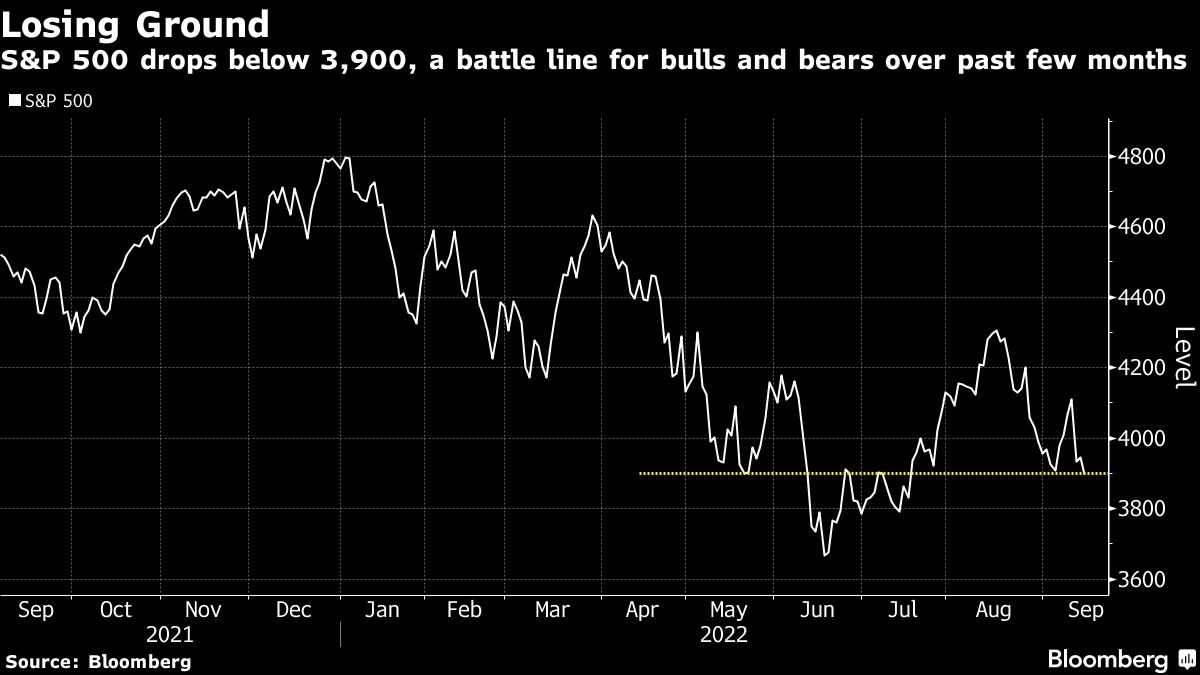 Traders expect the Fed fund rate to peak at close to 4.5 per cent next year, from the current range of 2.25 per cent and 2.5 per cent and Ray Dalio said a rise to about that level could sink stock prices around 20 per cent based on the present value discount effect.

The continued rise in rate-sensitive Treasuries deepened the curve inversion, a harbinger for a looming recession. The curve from five to 30 years inverted by as much as 20 basis points in US trading Thursday, a day after the two- to 30-year spread also became the most negative in more than two decades. Mortgage rates in the US topped 6 per cent for the first time in nearly 14 years.

“This is a market waiting for the next catalyst,” Fiona Cincotta, senior financial markets analyst at City Index, said by phone. “What we saw in the selloff on Tuesday is the repricing of expectations of the Fed. Until we really hear from the Fed we are not going to get a very clear direction.”

The offshore yuan weakened past 7 per dollar for the first time since July 2020. The yen traded around 143.4 per dollar, away from just under the closely-watched 145 level Wednesday on signs the Bank of Japan was preparing an intervention.

Oil fell after the Department of Energy said its plan to restock US emergency oil reserves doesn’t include a trigger price and deliveries likely won’t happen until after fiscal year 2023. Natural gas futures sold off in US trading after railroads and unions reached a tentative deal to avert a strike that threatened to disrupt domestic coal deliveries.

Gold fell to the lowest since April 2020 amid expectations of more aggressive interest-rate hikes by the Fed.