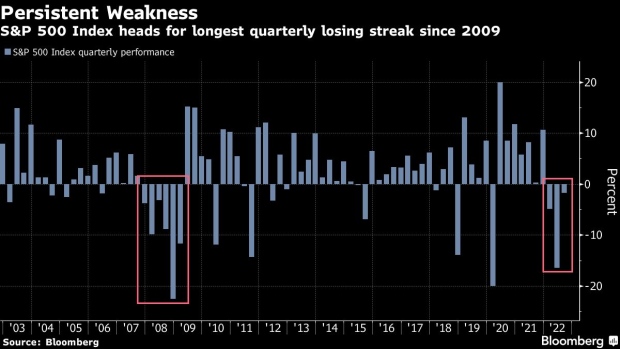 The New York Stock Exchange (NYSE) in New York, US, on Tuesday, May 31, 2022. The S&P 500 defied bear market status just over a week ago and is set to finish May roughly where it started. Photographer: Michael Nagle/Bloomberg , Bloomberg

(Bloomberg) -- There’s yet another ominous sign for markets -- the S&P 500 Index is headed for its third straight quarter of losses for the first time since 2008-09, when global markets were roiled by a financial crisis.

Though there isn’t necessarily a full-blown crisis yet, the big reversal in gains from the summer months has prompted financial market gurus at Morgan Stanley to Blackrock to flag one coming. Back in 2009, the global financial crisis saw the S&P 500 fall for six consecutive quarters, erasing 48% of its value.

Between July-September, the US benchmark lost 3.6%, totaling for an year-to-date decline of 23%. The third quarter was off to a flying start with gains of 14% through mid August, but it faltered as the rally was partly driven by bearish investors covering their short positions, rather than on strong fundamentals.

The rest of the year is already filled with headwinds as sticky inflation, hawkish central banks and economic uncertainty is set to keep risk appetite among investors under check. What’s more, the sentiment remains bearish with put options volume elevated and volatility near the highs of this year.

If there was one bright spot, it’s the seasonality: Historical data shows that the S&P 500 gained an average 4.1% in the final quarter of the year during the past 20 years.