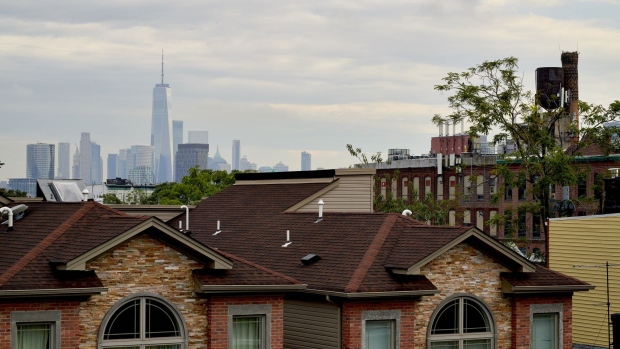 One World Trade Center building in front of residential homes in Jersey City, New Jersey, U.S.,, on Tuesday, Sept. 28, 2021. This year through mid-September, purchase contracts in Hudson County -- also home to Weehawken and Jersey City -- jumped 35% from the same period in 2020, according to data from Otteau Valuation Group. Photographer: Gabby Jones/Bloomberg , Bloomberg

(Bloomberg) -- Another quarter of big reserve releases at top banks may once again be skewing sentiment about the broader market.

In general, when reported earnings beat consensus estimates, the S&P 500 Index tends to do well. Bank earnings-per-share beats this quarter are topping misses, while the group accounts for a disproportionately large amount of the index’s earnings-per-share. Financials make up 11% of the S&P by weight, but ~20% of the index’s EPS, according to Wells Fargo strategist Chris Harvey, who sees bank earnings pushing the index EPS for the year above $200.

That could be good news for stocks across the board. However, those bank beats may also be reflecting large amounts that had previously been set aside for souring loans.

A 1.5% gain in third-quarter EPS since the start of October was driven entirely by financials, BofA equity and quant strategist Savita Subramanian wrote in an earlier note. She add a bit of caution, saying that during the last quarter, after the first week, earnings had beaten by 3.5%. She sees third-quarter EPS ultimately matching consensus estimates.

This was a post on Bloomberg’s Markets Live blog. The observations are those of the blogger and not intended as investment advice. For more markets analysis, go to MLIV.