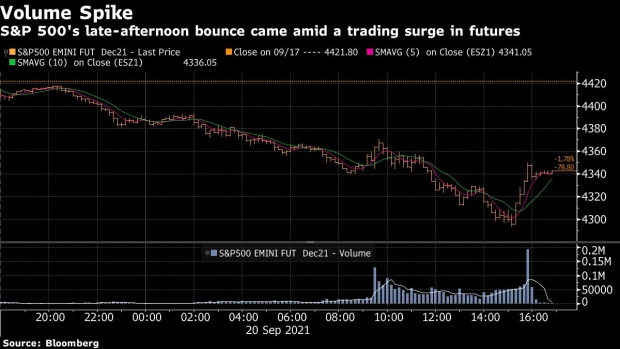 (Bloomberg) -- The late-afternoon bounce in U.S. stocks came amid a trading frenzy in the futures contracts.

More than 320,000 contracts changed hands in the 30 minutes through 4 p.m. in New York, almost three times as many as the average during comparable periods in the previous four hours, data compiled by Bloomberg show.

Strategists such as JPMorgan Chase & Co.’s Marko Kolanovic had called the late-afternoon rout an opportunity to buy because the global economic recovery is poised to pick up momentum. Meanwhile, options traders who piled into one-day puts on the index, which goes by ticker SPX, removed pressure in the market by closing out those positions. A similar thing happened with options on the biggest exchange-traded fund that tracks it, or SPY.

“There may have been institutional dip buying as several banks were pushing this as a buying opportunity and I also think monetization of 1-day SPX and SPY puts that were bought in the morning and sold by the close, which contributed to end of day rally,” said Danny Kirsch, head of options at Cornerstone Macro LLC.

Buying the dip had been a reliable strategy in 2021 up until Monday. In every month except April, the S&P 500 dipped to its 50-day average before bouncing back almost immediately. It fell below that level Friday and stayed below it Monday. The 100-day average was also breached, exacerbating the selloff, but the index managed to close 30 points above it at 4,357.

The selloff during the day, sparked by angst over China’s real estate sector and Federal Reserve tapering, sent traders piling into puts for protection. About 5.3 million bearish contracts on the SPDR S&P 500 ETF Trust changed hands, the most since June last year, data compiled by Bloomberg show. Yet as urgent as the demand for hedging looked, some traders said they saw no signs of panic.

“People are putting new hedges here,” Chris Murphy, co-head of derivatives strategy at Susquehanna, said in an interview on Bloomberg Television. “We have not had a move like this in a while. It feels pretty painful but it’s more run-of-the-mill.”

But it’s not just puts that were in high demand. Volume in call options on SPY also were elevated, a sign that some investors were betting that the selloff may be brief. About 3.9 million were traded, more than double the three-month average.

“Remember that the market was extremely well hedged coming into this move down,” she said. “We are seeing hedges monetized and investors actually purchases upside via call spreads in S&P.”