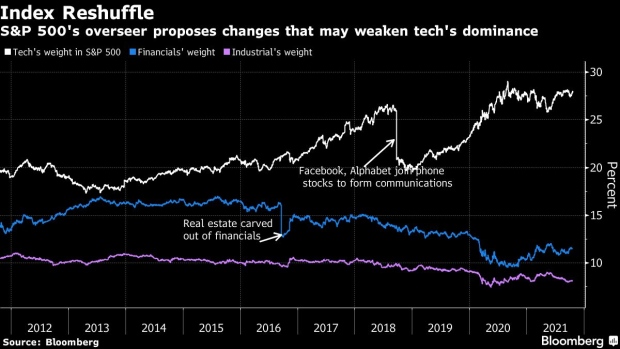 (Bloomberg) -- The huge technology group in the S&P 500 could become smaller next year should Visa Inc., PayPal Holdings Inc. and Mastercard Inc. join the financial sector.

If implemented, the changes could weaken tech’s share in the S&P 500, which has swollen to 28% -- topping the combined weights of the health-care and consumer-discretionary groups. Financials, the fourth-biggest industry, could then have a shot at becoming the No. 2 with the new additions, according to data compiled by Bloomberg.

This “could shake up three of the largest U.S. sectors,” Rosenbluth wrote in a note to clients. “We expect the changes to occur in 2022.”

Such a move would also make money managers at index and exchange-traded funds reshuffle their positions to mimic the changes. ETFs focused on technology, financial and industrial shares currently oversee $310 billion of assets, data compiled by Bloomberg Intelligence show.

The proposed revision is part of a consultation paper on the global industry classification standard that S&P announced earlier this week in conjunction with MSCI. The consultation ends on Dec. 20 -- with any changes to the GICS structure to be announced by February 2022.