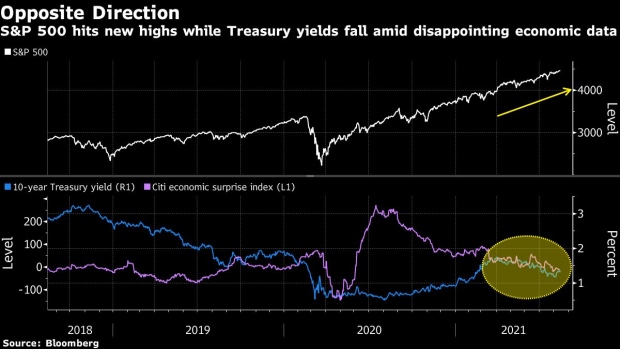 Buildings in the Manhattan skyline in New York, U.S., on Thursday June 17, 2021. New York state's pandemic mandates were lifted last week, after 70% of the adult population has now been given at least one dose of a coronavirus vaccine. , Photographer: Bloomberg/Bloomberg

(Bloomberg) -- Ten-year Treasury yields are mired below 1.3%. Portfolios are being adjusted to protect against stagflation. Consumer sentiment is plunging. And yet the S&P 500 Index is untroubled, rising from record to record.

Yes they’re being fueled by the stimulus, and yes their growth rate will eventually slow, but for now, corporate profits have investors’ undivided attention. They’ve underpinned a 20% gain already this year in part because of a belief that even if the bond market’s dour signal does come true, earnings will still turn out OK.

That capacity, on display after the financial crisis and writ large in 2020 as quasi-monopolistic stay-at-home tech behemoths kept the S&P 500 aloft while the rest of the economy shrank, is emboldening equity bulls.

“Equities would obviously prefer the bond market to be wrong in a sense that they like more growth, they like more earnings,” said Ben Laidler, eToro’s global markets strategist. “But the equity market is not the economy. If you compare the two, the equity market has massive technology in it, a lot less small-caps. Those earnings are super defensive to a no-GDP-growth scenario.”

Everyone is aware earnings have shot back from their coronavirus trough. Lately, forecasters are taking it further, saying profits are on track to double from levels reached even before the pandemic began. Evercore ISI’s Ed Hyman said in May that S&P 500 per-share earnings could reach $300 by 2027. Now Leuthold Group’s Jim Paulsen says the target could be hit two years earlier.

While not totally untethered from the economy, corporate America has continued to outgrow gross domestic product at a blistering clip. During the last decade, when the economy was stuck in the weakest recovery since World War II, S&P 500 profits expanded at an annualized rate of 10%.

American firms’ thriving global reach helped. Also fueling the above-GDP growth is a push to minimize the role of human workers empowered by technology innovations, a trend that picked up during the Covid-19 pandemic. At the end of June, S&P 500’s annual earnings surpassed the pre-pandemic peak by 10%, double the incremental gain seen in GDP.

Even surprisingly gloomy University of Michigan data on Friday that showed consumer sentiment at its lowest level since 2011 didn’t stop the S&P 500 from eking out a 0.2% gain.

Of course, issues like supply chain bottlenecks and a shortage of workers could hurt profits, and business leaders are acknowledging that risk. Labor-related mentions during earnings calls, for instance, more than doubled this season from a year ago to a record, pointing to increased wage pressure, data compiled by Bank of America Corp. show.

To Peter Cecchini, director of research at Axonic Capital LLC, the current boom in corporate earnings was mostly driven by consumer spending as a result of massive fiscal aids, and that demand is now threatened by higher prices with the Fed willing to let inflation run hot.

In the eyes of analysts who follow individual companies, profit growth is set to slow, but at roughly 10% in each of the next two years, that would still top the historic rate of 6% annually.

Moreover, confidence in business leaders’ ability to wring more earnings from sales stays intact despite mounting concern about inflation. Profit margins, which just reached a record high, are expected to increase over the next years, analyst estimates compiled by Bloomberg Intelligence show.

To Paulsen, chief investment strategist at Leuthold, this boom cycle is just starting. He anticipates sustained high growth rates, even if monetary and fiscal support is pulled, thanks to favorable factors that emerged after the pandemic, such as low inventory levels, mounting savings and higher productivity.

Admitting that plenty of assumptions are at play in the study and none may come to pass, Paulsen still considers it “a reasonable likely outcome.”

“You can worry about what does the bond market know that we don’t when it’s falling every day in yield, but does it really kill it off?” he said. “There’s a lot of sins or problems that are just run over by amazing fundamentals.”