Investors need to look at alternative assets instead of sticking to the 60/40 method: Rob Tétrault

Stocks trimmed losses from nearly oversold levels, while bond yields soared on bets the Federal Reserve will stay hawkish as it confronts the hottest inflation in about four decades.

After exhausting gyrations, the S&P 500 managed to close slightly above 3,900 -- a threshold seen by some technical analysts as a make-or-break level for short-term direction. Treasuries tumbled across the curve, taking the 30-year rate to the highest since 2014. The Bloomberg Dollar Spot Index rose to another record, while the Japanese yen hit a fresh 24-year low.

Hedge funds have raised exposure in back-to-back weeks, data from Goldman Sachs Group Inc.’s prime brokerage show, increasing short sales via macro products such as index futures while buying shares of individual firms. The data suggest that money managers are both keen to pick up bargains and leery about the broader market’s direction.

US shares have given up about half of a rally from their June lows after a raft of Fed speakers signaled the central bank will keep its policy tight. While the equity market should still remain in “choppy waters,” several indicators suggest the selling is getting overdone, according to Keith Lerner at Truist Advisory Services.

“Markets do not typically move in a straight line,” said Lerner. “Of course, oversold markets can get more oversold. Still, after advocating for trimming equities on strength, we would be less apt to do so now -- at least over the short term.”

To Matt Maley at Miller Tabak + Co., any stock gains at this point should be seen as a short-term relief rally. He says traders should use those bounces as an opportunity to get more defensive.

Meantime, one of Wall Street’s biggest bears is turning even more pessimistic on the outlook for profits. 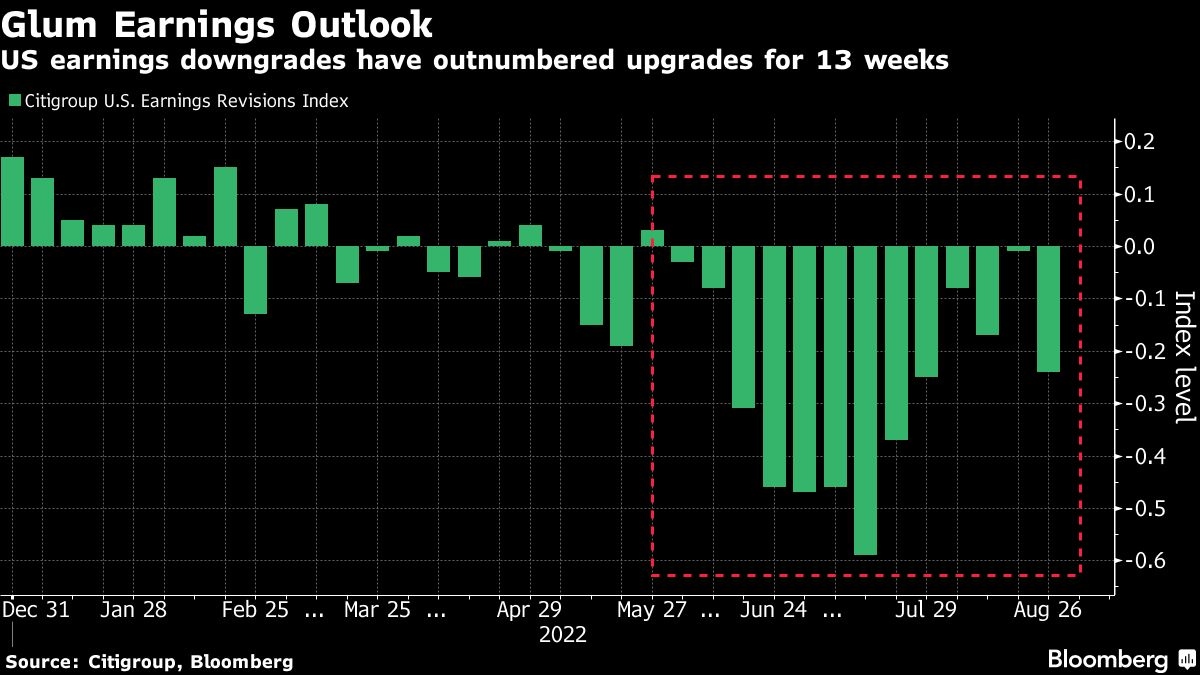 Morgan Stanley strategist Mike Wilson cut his expectations for earnings-per-share growth, saying that a slowing economy is now likely to be a bigger concern for stocks. In 2023, he expects profits to fall 3 per cent -- even in the absence of an economic recession.

Investors are unwinding their equity positions as if a deep recession is already here. So say strategists at Deutsche Bank AG, who found that a historically strong link between discretionary investors’ equity exposure and the ISM manufacturing index is unwinding.

Their current stock exposure stands at the bottom-10th percentile of historical observations after a sharp drop last week. Historically, that’s been consistent with an ISM print of 47, below the level of 50 that signals an economic contraction.

Traders bracing for a recession jolt have recently accelerated their retreat from stocks, with global equity funds posting outflows of US$9.4 billion in the week to Aug. 31 -- the fourth-largest redemptions this year, according to EPFR Global data cited by Bank of America Corp.

Amid rising borrowing costs, US companies extended a worldwide wave of issuance -- offering the largest amount of bonds in 12 months. The newfound urgency to raise debt is sparked by the potential for greater uncertainty -- and higher cost -- after this month’s meeting of the Federal Open Market Committee.

In the final week before officials enter a blackout period ahead of the Sept. 20-21 policy meeting, Fed Chair Jerome Powell leads a hefty lineup of central bankers offering their views. Their remarks will be weighed carefully for evidence of a tilt toward another 75 basis-point rate increase, or if there’s scope for the hiking pace to be dialed back.

“The Fed is going to do whatever it takes to get inflation under control,” said Gene Podkaminer, head of research at Franklin Templeton Investment Solutions. “If market participants don’t believe them, it’s probably at their own peril.”