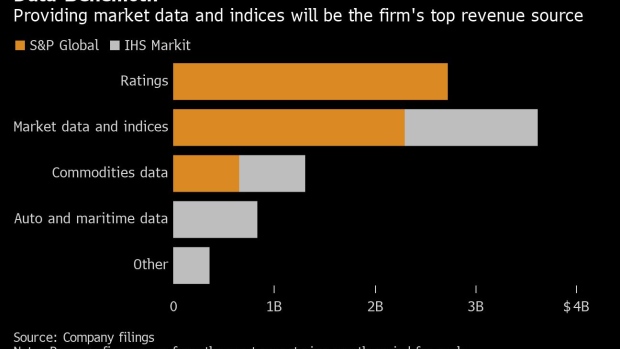 (Bloomberg) -- S&P Global Inc. grew out of a firm that provided bond ratings and railroad data. IHS Markit Ltd. traces its roots to a British barn and an effort to offer prices for the opaque world of credit derivatives.

Now, the second-biggest acquisition of 2020 will combine the two into a data Goliath that tracks everything from the price of wheat to the movements of hundreds of thousands of ships criss-crossing the world’s oceans.

The $39 billion deal underscores the central role of data in financial markets and the ever-growing demand from investors for information that gives them an edge in increasingly fast and computerized markets. Global spending on market data and analysis rose almost 6% to $32 billion last year, according to Burton-Taylor International Consulting.

“Data is the lifeblood of markets,” said Roman Ginis, chief executive officer of Imperative Execution, an equities-trading venue. “Diversifying into data makes a lot of sense, and the more people need this data, the more you can charge for it.”

S&P is widely known for its ratings and index businesses, and the purchase of IHS Markit would give it a stronger foothold in more opaque markets for financial derivatives including credit default swaps and collateralized loan obligations. In commodities, S&P Global Platts is the main provider of benchmark prices for key raw materials, including oil and refined products. That business could be complemented by IHS Markit’s maritime products, which include ship tracking, port data and information on trade flows.

Bloomberg LP, the parent of Bloomberg News, competes with IHS Markit and S&P Global in providing financial analytics and information. Other providers include Moody’s Analytics, FactSet and Intercontinental Exchange Inc., according to Burton-Taylor.

Some recent transactions in the industry have come under scrutiny. London Stock Exchange Group Plc is still negotiating with the European Union over its agreement last year to acquire Refinitiv Holdings Ltd. for $27 billion, over concerns that the company’s control of data could make it the gatekeeper for an entire industry.

But Bloomberg Intelligence analyst Larry Tabb said he doesn’t see significant antitrust risk in the S&P deal. The primary competitive overlap between the companies’ businesses is in energy research and data, but otherwise they have different specialties, he said.

S&P Global Chief Executive Officer Doug Peterson said on a conference call with analysts Monday that S&P doesn’t foresee any regulatory issues “that can’t be resolved if they do come up.”

The deal will likely get separate scrutiny from merger regulators in the European Union and U.K. as the British authority starts weighing deals after the country’s exit from the EU.

The combination could also reduce S&P Global’s reliance on a ratings business whose fortunes are somewhat tied to market activity. IHS Markit said almost 90% of its revenue in the nine months ended in August was recurring.

“With a more diversified portfolio of assets and increased visibility (i.e. more recurring revenue) on earnings, we believe the combined entity can command a higher earnings multiple longer term,” Oppenheimer & Co. analyst Owen Lau wrote in a note. “We believe the potential merger will benefit the shareholders of both companies.”

IHS Markit has grown rapidly over the past two decades and has faced regulatory concerns about competition before. A civil probe by the U.S. Justice Department examined whether banks conspired to use Markit before the financial crisis to maintain their dominance in credit-default swaps and prevent new players from gaining a foothold. The DOJ probe was dropped after government concerns were addressed by new rules under the Dodd-Frank Act, people said at the time.

The European Commission said in 2013 it probed difficulties faced by Deutsche Boerse AG and Chicago-based CME Group Inc., two of the world’s largest derivatives clearinghouses, as they sought to start a central clearing platform for instruments including credit default swaps from 2006 to 2009. Markit and the International Swaps and Derivatives Association, which was also under investigation, settled the claims in 2016.