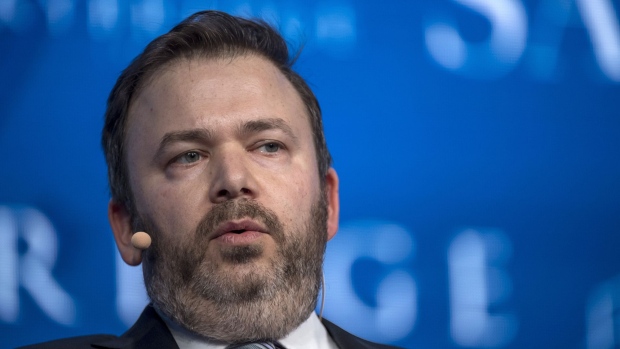 SPACs are maligned by equity investors who fear there are too many of the vehicles outstanding and not enough companies for them to buy. But the securities have an interesting structure that makes them bond-like in many situations, Weinstein said, speaking at a “Best Ideas for 2022” webinar that he hosted on Friday.

The money that SPACs raise is held in a trust and invested in Treasuries, funds that ultimately get unlocked when the vehicle buys a company. On top of that, SPACs are sold with warrants that can offer interesting returns, either if they are sold immediately or if the company gains value.

Meanwhile, credit derivatives offer a relatively cheap way to hedge against broad market calamities, Weinstein said. Risk premiums on corporate bonds have only widened a touch this month while the U.S. stock market has dropped.

But the corporate debt market may be too complacent about risks now as the Federal Reserve tightens the money supply and starts shrinking its balance sheet, Weinstein said. The market for company debt is much bigger than it was two decades ago, and dealers hold far fewer of the bonds than they used to, meaning when investors look to sell their holdings, prices can fall quickly, he said. Credit derivatives can offer cheap protection against these moves, he said.

“What’s unusual today is a VIX at 30 and credit spreads this low,” Weinstein said, referring to the equity market volatility index that’s seen as a fear gauge and has jumped this month.

Saba isn’t new to SPACs, and had invested in more than 400 of the companies as of October. Last year, it quickly sold its entire stake of unrestricted stock in blank-check company Digital World Acquisition Corp. after discovering it planned to merge with former President Donald Trump’s new media venture.

While company credit quality may remain strong in the coming months, Weinstein said that market technicals will continue to take precedence over fundamentals, a trend that was laid bare by the meme-stock run-up witnessed roughly a year ago, he said.

“Technicals matter more than ever before,” he said. “All of a sudden things can be willed to where they go to.”

“I feel like such an odd duck in these credit conventions, because people are just talking fundamentals. It’s not how I think the credit market trades,” Weinstein said.

Opportunities still abound in credit, and the “great mispricing” in corporate fixed income that existed before the pandemic still exists today, Weinstein said. “Overall, it’s extraordinary. All it takes is a significant downward move in the market for it to really express itself.”