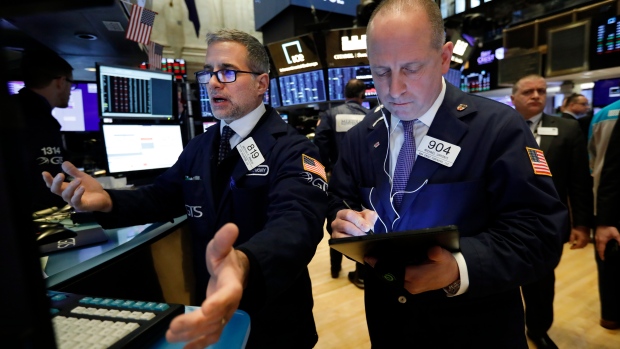 Specialist Anthony Rinaldi, lefr, and trader Michael Urkonis work on the floor of the New York Stock Exchange, Monday, Jan. 27, 2020. Stock tumbled at the open on Wall Street following a sell-off in markets in Europe and Japan as investors grow more concerned about the potential economic impact of an outbreak of a deadly coronavirus. , AP Photo/Richard Drew

Investors in U.S. exchange-traded funds are playing it safe, but that could be to their detriment.

As traders weigh the threat of coronavirus, almost US$202 million flowed into the JPMorgan Ultra-Short Income ETF on Friday, the biggest single-day inflow since November 2018, according to data compiled by Bloomberg. Meanwhile, a similar fund run by BlackRock Inc. had its biggest weekly inflow since September, and the largest utilities ETF in the U.S. added the most this year.

Investors may soon regret that caution. Although the virus continues to dominate headlines, U.S. stocks rebounded on Monday from their worst weekly plunge in six months amid speculation that the American economy is strong enough to withstand any impact on global growth from the illness’s spread. Yet a flight to safety last week means many ETF users are missing out.

“Such fear-induced moves rarely pay off,” said James Pillow, a managing director at Moors & Cabot Inc. “Increasing cash and alt-cash when volatility increases is a normal response. It’s rarely the right response, but it is the historically normal one.”

ETFs that hold short-term debt are increasingly used by institutions in lieu of cash. JPMorgan’s US$10.9 billion fund, ticker JPST, aims to maintain low volatility using bonds with a duration of one year or less.

Financial fears eased over the weekend as the Chinese central bank said it will supply a net US$21.7 billion to money markets and will advise banks to lend more to mitigate the virus’s impact. While onshore stocks still tumbled on Monday as they reopened after national holidays, a gauge of U.S. manufacturing showed the sector rebounded sharply in January, topping estimates and signaling growth ahead.

“The stock market has proven quite resilient in recent years, quickly recovering from pullbacks,” said Todd Rosenbluth, director of ETF research at CFRA Research. “Those investors that took a more defensive stance can miss out on some of the benefits but might be able to sleep better at night.”