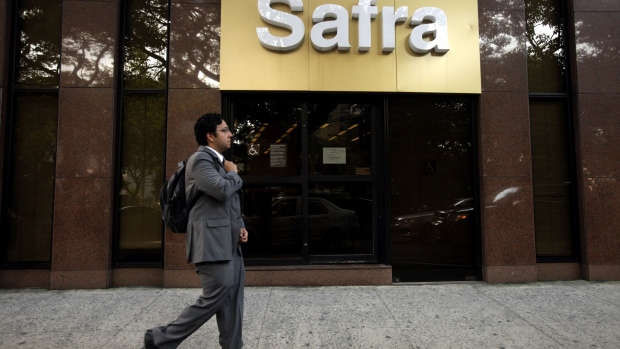 (Bloomberg) -- Alberto Safra, whose family owns a multibillion-dollar banking empire, is looking to sell his stake to his siblings, a move that would effectively end a dispute over one of history’s largest wealth transfers, according to people with knowledge of the matter.

The move is part of an ambitions plan by Alberto, one of four children of the late billionaire banker Joseph Safra, to turn his own family office into one of Latin America’s biggest. He’s told people that offloading his share of the businesses could pour as much as $5 billion into his investment firm over the course of a decade, as payments for his portion would be staggered.

Discussions are ongoing and involve multiple countries, so it’s unclear when a final agreement will be reached, if at all, the people said.

Excluding their mother, Vicky, the four Safra children have stakes currently worth about $3.4 billion each, according to the Bloomberg Billionaires Index, which values their closely held companies based on publicly traded peers. Their most valuable businesses -- three banks with about $100 billion in assets -- have grown steadily over past years.

A spokesperson for Alberto Safra declined to comment. A representative for his siblings didn’t reply to a request for comment.

The Safra fortune is both vast and global, spanning more than 180 years. The family owns Banco Safra SA in Brazil, Safra National Bank of New York in the US and J Safra Sarasin in Switzerland. They also have real estate holdings, including the Gherkin building in London and 660 Madison Avenue in New York, as well as a stake in banana company Chiquita Brands International.

After Joseph Safra’s death in December 2020, what was supposed to be a long-orchestrated succession ended up in a New York court, laying bare the divisions within the family.

Joseph Safra spent more than a decade planning his succession, which involved multiple wills, wealth transfers and preparing his sons for command. But Alberto claimed in an August court petition that after he left the family’s lender in 2019, his father, who died at age 82, “hastily changed his wills” to cut him off from his inheritance and increase his siblings’ share of the estate.

Alberto then asked a judge to let him pursue evidence in the US for use in a challenge to his father’s will that he intended to file in Switzerland. At the time, a spokesperson for the Safra family said there was no basis for challenging the will.

Safra Son to Contest Father’s Will After Being Disinherited (1)

While their legal dispute has been dragging through the evidence discovery process, the Safras have been trying to come to an out-of-court agreement, the people said. Besides Alberto, his mother, Vicky, other key family members include their older brother, Jacob, younger brother, David, and their sister, Esther.

Under the terms currently being discussed, Alberto would be barred from creating a new bank to compete with his brothers after selling his stake, the people said. Alberto plans to use the funds to to capitalize ASA Investments, a business he created after leaving Banco Safra that’s partly his family office but also an asset manager that sells products to outside investors.

It’s unlikely any agreement brings changes to the day-to-day operations of the Safra empire. For decades, Jacob has overseen the family businesses outside of Brazil. After Alberto walked away from the board of the family’s Sao Paulo-based flagship, Banco Safra, David took full control of its operations. Esther is an educator with no ties to the bank.

Alberto has been moving to beef up his business, even before a possible windfall. ASA has made a slew of new hires this year, including Fabio Kanczuk, formerly the economic policy director at Brazil’s central bank, and Angelo Polydoro, an economist from a rival money manager in Brazil. It also bought CORE Real Estate Gestao de Investimentos to expand the firm’s real estate offerings.

The siblings’ resolution would mirror how their father ended another family feud in the past.

Joseph Safra and his brother Moise split in the 2000s, when a falling out led Joseph to create a rival lender across the street. To end the dispute, Moise sold his share of the family business to Joseph in 2006 for a reported $2.5 billion.

Moise died in 2014 -- like his brother, he also suffered from Parkinson’s disease and cancer.