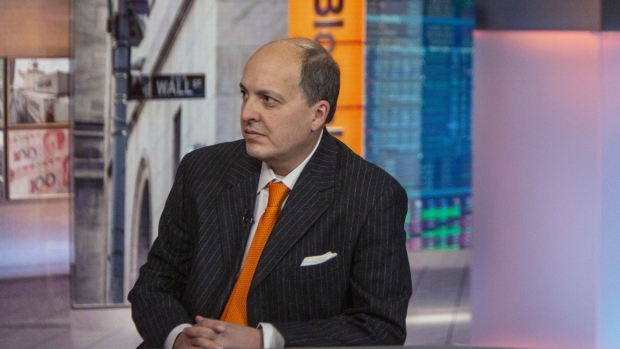 His $4.3 billion Haidar Jupiter hedge fund soared about 19% in September, according to people with knowledge of the matter. That lifts his year-to-date returns to 274%, nearly four times the best-ever annual performance for the money manager since he started trading more than two decades ago, said the people, who asked not to be identified because the information is private.

Haidar is currently at the top of the pile of macro trading firms, whose bets on the direction of economies are coming good as volatility roars back from years of calm. Money managers from Crispin Odey to Michael Platt are seeing record profits. Rokos Capital Management and Brevan Howard Asset Management have also made double-digit gains.

At the heart of Haidar’s performance -- and that of many of his rivals -- is leveraged rates trading, which positioned them to benefit when central banks started raising interest rates from rock bottom to contain spiraling inflation.

His main trade, at least in the last several months, had been short wagers on rates as the market tries to find a way for a Federal Reserve pivot that he hasn’t believed will happen anytime soon, one of his investors said. Haidar provided some clues in his letter to investors last month.

“For the last year, investors have been prematurely anticipating an early end to central bank rate hikes, followed by rate cuts almost immediately thereafter,” Haidar wrote in a letter sent in September. “But as inflation globally has proven stickier than originally thought, central banks have become more forceful in countering this narrative.”

The money manager had been shorting rates in the US and UK, along with the G7 countries in general, which have seen bond yields soar as traders aggressively bet on the pace and extent of interest rate hikes, according to one of his investors.

Similar trades have helped others to produce bumper gains. Odey, whose main fund was at one stage betting 800% of its net asset value against long-dated UK government bonds, is up 193% this year. The macro hedge fund run by Chris Rokos is up about 35% this year, almost erasing record losses suffered in 2021, according to a person with knowledge of the matter.

Over at Brevan Howard, returns have risen to almost 20% at its flagship macro hedge fund mostly thanks to successful rates trading, according to investor documents. Maniyar Capital, a London-based discretionary macro manager that combines fundamental analysis and quantitative techniques, gained 6.3% last month to bring year-to-date returns to 10.3%, a person said.

Haidar, who previously worked at Credit Suisse First Boston and Lehman Brothers, founded his firm in 1997. While this year’s blockbuster gains have put him in the limelight, his band of investors have seen consistent returns over two decades.

When a cohort of macro traders were busy blaming quantitative easing for a lack of opportunities in the years after the 2008 financial crisis, Haidar was picking up small gains in government bond sales, people said. He would snap up bonds at a discount and sell them in secondary markets to institutions such as pensions for small gains -- which added up over multiple sales and further boosted by leverage.

A client placing $1 million in Haidar’s fund at its inception would now have $215 million, compared to $4.1 million invested in S&P 500 including reinvested dividends and $3.7 million in average hedge funds over the same period, according to Bloomberg calculations from investor documents and market data.

Such gains have been shared among a small group: for most of its lifespan, Haidar’s fund has managed less than $1 billion. Two of his investors said Haidar himself makes up more than a third of the fund’s assets, which may have now topped $5 billion including last month’s gains.

That means he shares in the losses during rare spells with double-digit declines, such as an 18% fall in June last year and a 25% loss in November 2020.

This year, the fund has made most of its money from its fixed income and commodities trades, according to the letter. Haidar predicted that risk assets will remain under pressure as investors readjust their expectations to be more in line with central bank guidance and monetary policy tightening continues to drain liquidity from markets.