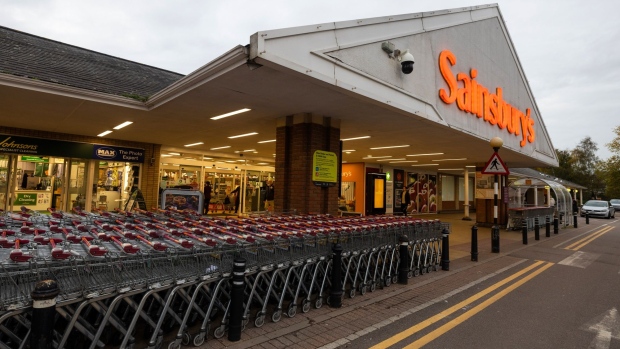 A sign outside the entrance a J Sainsbury Plc supermarket in Hemel Hempstead, UK, on Monday, Oct. 31, 2022. Sainsbury's are due to report their latest earnings on Nov. 3. Photographer: Chris Ratcliffe/Bloomberg , Bloomberg

(Bloomberg) -- J Sainsbury Plc is investing an extra £50 million ($61 million) to keep prices down as the cost-of-living crisis grows in the UK.

As part of the latest push, more than £15 million is targeted to make shoppers’ Christmas spend more affordable, for example with ingredients for a roast dinner at less than £4 a person.

Shoppers are seeking to save money by buying own-brand goods and smaller baskets of items. Consumers are likely to get even thriftier as the UK has fallen into a “short and shallow” recession, according to the Confederation of British Industry.

Britain’s second-largest supermarket already pledged to spend £500 million on prices over two years. Sainsbury said the £550 million it’s now spending is the most the retailer has ever spent battling price inflation over such a period.

Competition is growing among Britain’s grocers with discounter Aldi becoming the fourth-largest in September.