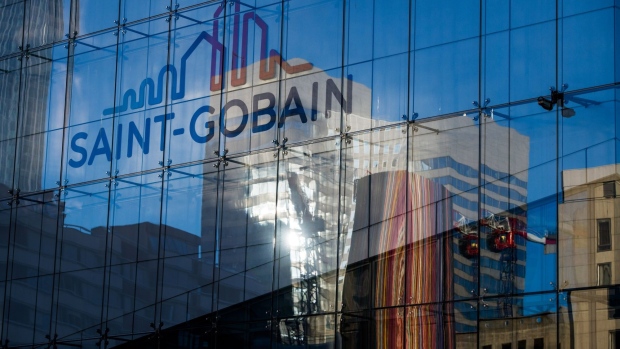 Signage for Cie. de Saint-Gobain at the company's headquarters in the Saint-Gobain Tower in the La Defense business district of Paris, France, on Thursday, June 16, 2022. The global building materials manufacturer is likely to surprise the market again and keep its upward growth trajectory above expectations, according to Bloomberg Intelligence. Photographer: Nathan Laine/Bloomberg , Bloomberg

CVC’s building materials business, Stark Group A/S, is trying to hammer out final terms of an agreement with St. Gobain, the people said. It could reach a deal as soon as this week, the people said, asking not to be identified because the information is private.

Jewson may fetch as much as £1 billion ($1.2 billion) in a sale, the people said. Deliberations are ongoing, and another buyer could still emerge if talks drag on or fall apart. Representatives for St. Gobain and CVC declined to comment.

St. Gobain, the French supplier of construction materials, acquired Jewson as part of its 2000 takeover of Meyer International Plc. The UK retail business was founded in 1836 by George Jewson and offers timber, building materials and equipment hire.

CVC agreed last year to buy Stark Group, a leading distributor of heavy building materials for the construction industry in northern Europe. The Copenhagen-based firm serves more than 260,000 customers across the Nordics, Germany and Austria, according to its website.

The private equity firm’s ability to do the deal through Stark made it easier to obtain financing, giving it a leg up against rival buyout funds that didn’t already own a business in the sector.

St. Gobain Chief Executive Officer Benoit Bazin, a serial dealmaker, is moving ahead with the Jewson disposal at a challenging time. Deteriorating macroeconomic conditions are spooking banks and reducing their willingness to lend on deals. Private credit funds have stepped in to plug the gap on smaller deals.

--With assistance from Kiel Porter and Francois de Beaupuy.