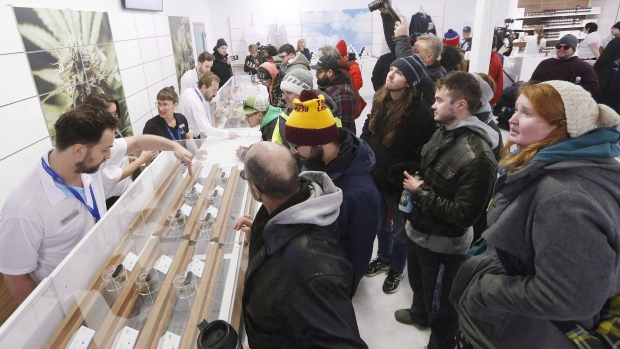 People check out the sample counter at a cannabis store in Winnipeg, Man., October 17, 2018 , The Canadian Press/John Woods

Revenue in Canada’s cannabis sector is forecasted to more than double next year despite slower-than-expected growth, according to a leading industry analyst.

Canaccord Genuity analyst Matt Bottomley said in a research note to client that Canada’s cannabis industry should expect $3.16 billion in revenue in 2020, up from the $1.46 billion forecast for 2019.

“As retail dispensaries continue to roll out and new product forms under ‘Cannabis 2.0’ are set to hit the shelves as early as mid-December, we believe the sector will see significant growth in 2020,” Bottomley said.

“However, as additional capacity comes on line and competition among producers intensifies, we believe the proportion of the market opportunity captured by [licensed producers] will face headwinds in addition to the likelihood of some degree of unforeseen logistical hurdles in rolling out the next leg of the industry.”

Bottomley said Canada’s cannabis retail figures should see a five per cent reduction in overall sales in September from the prior month to $121 million, but said subsequent growth should advance at a five-per-cent monthly clip. That’s roughly one-third of the 14 per cent growth seen in the Canadian pot retail space over the initial 10 months of legalization, according to Statistics Canada figures.

“We believe this rate of growth is elevated by what are likely seasonally strong summer months and from initial bursts of demand brought on by new store openings,” Bottomley said.

Rade Kovacevic, president of Canopy Growth, joins BNN Bloomberg's David George-Cosh at the company's headquarters to discuss what's in store for irexpansion into edibles and beverages.

While there should be more interest from Canadian consumers in 2020 with several new cannabis-infused products set to hit store shelves, Bottomley expects growth in the recreational market to increase by just 7.5 per cent over the year. He added that medical revenues should grow by a modest two per cent.

However, the cannabis wholesale business will continue to be a major revenue driver for Canada’s pot companies, according to Bottomley. He also expects the total amount of revenue that Canada’s licensed producers will be competing for will be just $1.77 billion, given that a majority of those companies earn revenues from wholesaling directly to provincial distributors.

The other $1.43 billion that should make up the remaining 2020 industry revenues will come from selling into the retail recreational market, Bottomley notes.

Alongside its latest estimates for the Canadian cannabis industry, Canaccord’s analysts have revised sales projections for some of the country’s largest licensed producers.

Canaccord now expects Canopy Growth Corp. to report $445 million in net revenue in its fiscal 2020, down from earlier forecasts of $620 million, while posting a EBITDA loss of $193 million compared to a prior estimate of $224.7 million.

Meanwhile, Canaccord expects Aphria Inc. to make $507.7 million in net revenue in 2020, down from prior estimates of $572.8 million. The company’s EBITDA is now revised down to $40.1 million from earlier estimates of $62.5 million.