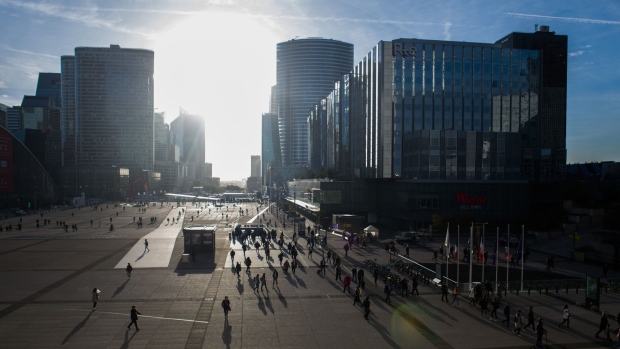 Office workers commute to work in the La Defense financial district of Paris, France, on Thursday, Oct. 7, 2021. France’s economic outlook improved over the summer despite a surge in cases of the delta variant, suggesting an increased vaccination rate may have ended the stop-go disruption of the pandemic. , Bloomberg

(Bloomberg) -- Annual sales of new collateralized loan obligations reached a post-financial crisis record in Europe, a symbolic milestone for the asset class that was once seen as a niche corner of the debt market.

Nearly 30 billion euros ($35 billion) of new deals have priced this year, surpassing the previous high set in 2019, according to data compiled by Bloomberg. In the U.S., volumes also hit a record earlier this month.

A rush for higher-yielding assets has highlighted the relative value of CLOs, which bundle junk-rated company loans into plain vanilla bonds. The increased pace of issuance also reflects the fact that investors have piled into riskier debt as central bank stimulus programs depress returns in the safer parts of the debt market. CLOs’ floating rates have only heightened their appeal amid rising inflation.

“It’s the golden hour for credit,” said Laila Kollmorgen, a portfolio manager who oversees CLOs at Pinebridge Investments. “When you look at CLOs, the relative value versus investment-grade, versus leveraged loans, versus high yield, versus other credit sectors continues to be very appealing.”

CLOs have benefited from near-record leveraged loan volume this year as private-equity buyouts surged. M&A activity is set for a record year and it’s expected to remain strong next year, according to Barclays Plc research.

In the wake of the pandemic, the CLO market has drawn scrutiny from regulators and ratings firms, who expressed concern about the deteriorating quality of loans getting bundled into the securities.

Junk-rated borrowers, however, fared better than expected, supported by central-bank and government measures. Fitch Ratings recently cut its leveraged-loan default-rate forecast for the end of 2021 to 2.5% from 3.5%.

Still, some investors are warning that leveraged loans have become riskier and have moved to the sidelines. In Europe, legal safeguards for leveraged loans hit the lowest on record in September, on average, according to research firm Covenant Review’s data going back to 2017.

The global CLO market crossed the $1 trillion mark in terms of debt outstanding earlier this year, according to JPMorgan.