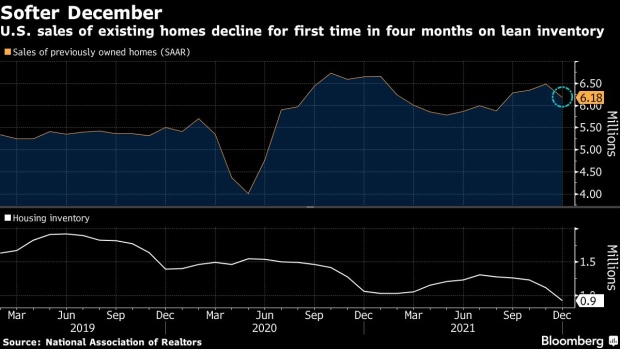 A contractor walks past a "For Sale" sign while working on a home under construction in the Norton Commons subdivision in Louisville, Kentucky, U.S., on Monday, March 23, 2020. Purchases of new U.S. homes in February held close to an almost 13-year high, showing momentum in the residential real estate market before economic activity fell victim to the coronavirus. , Bloomberg

(Bloomberg) -- Depressed housing inventory curbed U.S. sales of previously owned homes at the end of the strongest year since 2006, and a recent spike in mortgage rates risks a further tempering of purchases.

Contract closings decreased 4.6% in December from the prior month to an annualized 6.18 million, figures from the National Association of Realtors showed Thursday. Still, sales climbed to 6.12 million last year, while home prices appreciated by the most since 1999.

The December drop reflected both lean inventory and the start of a pickup in mortgage rates that have since climbed to the highest level since March 2020. The number of properties for sale last month was the lowest on record.

“Even as sales are falling, the fact that prices are showing this strength is showing that buyers are there. But the lack of inventory is hindering some of the sales activity,” Lawrence Yun, NAR’s chief economist, said on a call with reporters.

The median forecast in a Bloomberg survey of economists called for a 6.42 million annualized rate in December.

There were just 910,000 homes for sale last month, down 18% from a month earlier and 14.2% from a year ago. At the current pace it would take 1.8 months to sell all the homes on the market, also a record low. Realtors see anything below five months of supply as a sign of a tight market.

Cash sales represented 23% of all transactions last month and investors made up 17% of the market. First-time buyers accounted for 30% of sales in December.