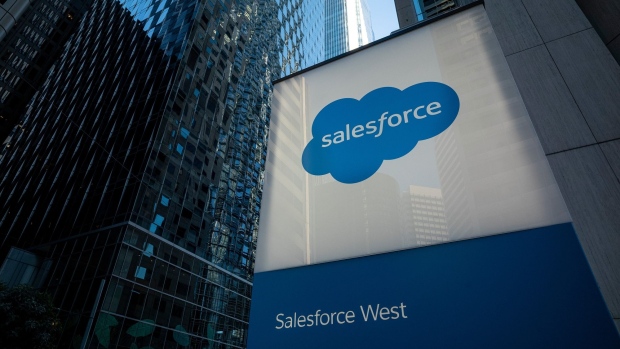 (Bloomberg) -- Salesforce.com Inc., the top maker of cloud-based customer-relations software, gave revenue and profit forecasts for the current period that fell short of analysts’ estimates. The shares declined about 6% in extended trading.

The company, separately, promoted Bret Taylor to co-Chief Executive Officer with Marc Benioff, who also will remain board chair. Taylor has been president and chief operating officer since 2019.

Profit, excluding certain items, will be as much as 73 cents a share in the fiscal fourth quarter, ending in January, Salesforce said Tuesday in a statement. Analysts on average projected 82 cents, according to data compiled by Bloomberg. Revenue will be as much as $7.23 billion, compared with an estimate of $7.24 billion.

Salesforce also projected sales of as much as $7.25 billion in the first quarter, ending in April. Analysts, on average, estimated $7.35 billion.

The guidance suggests that some Salesforce customers may be reluctant to pay for new projects as Covid-19 cases flare up and the omicron variant emerges. Other corporate software makers have posted results that showed challenges keeping up growth rates that met investor expectations. Only five of 35 business software companies tracked by JMP analyst Pat Walravens saw their shares rise after reporting quarterly results. The median stock is down more than 13% since reporting, Walravens wrote in a note.

In the fiscal third quarter ended Oct. 31, revenue increased 27% to $6.86 billion. Profit, excluding some items, was $1.27 a share. That compares with sales of $6.8 billion and earnings of 92 cents a share, according to the average estimates of analysts polled by Bloomberg.

Salesforce in July completed the acquisition of Slack for $27.7 billion, a deal meant to fuel sales growth of more than 25% a year. The transaction gave Benioff another product to hawk to customers -- a popular enterprise chat program that has been used to help employees communicate and collaborate, especially during the pandemic. Still, Slack faces increasing competition from Microsoft Corp.’s Teams program, and it fell behind companies like Zoom Video Communications Inc. at providing videoconferencing services early in the lockdowns.