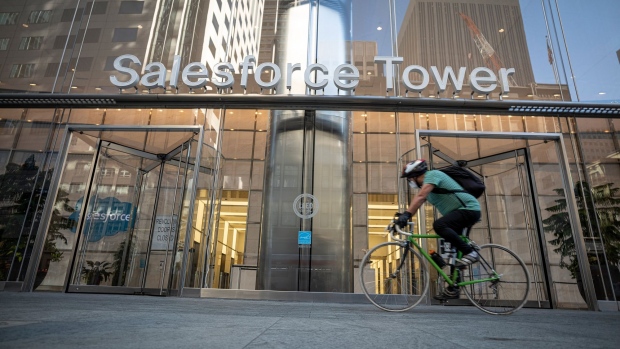 (Bloomberg) -- Salesforce Inc., one of the first tech companies to let employees work from anywhere, is requiring some sales workers to return to the office and abide by other productivity rules as the software maker grapples with slowing revenue growth.

Some sales employees who live near offices were asked to work at company locations Tuesday through Thursday beginning this week, according to an internal memo issued last week and seen by Bloomberg. The message was posted by a senior manager in a Slack channel for hundreds of sales workers.

Each account executive will be expected to conduct eight customer meetings a week -- half in-person -- deliver twice-weekly internal presentations. The rules are intended to “drive more collaboration and success” in the current quarter, the manager wrote.

Co-founder Marc Benioff, long a proponent of remote work, appeared to soften his tone on office mandates during a conference call with analysts Wednesday after the company released its quarterly results. “Even at Salesforce we have what I would call factory jobs -- folks that are required to be here,” Benioff said, citing core operational roles or entry-level workers who need mentorship. “But we’re never going back to how it was.”

A company spokesperson said Salesforce has a “hybrid work environment that empowers leaders and teams to work together with purpose. They can decide when and where they come together to collaborate, innovate and drive customer success.”

Salesforce, the top provider of customer management software, has been struggling with slowing growth and investor pressure to improve profit. On Wednesday, the company reported its smallest year-over-year quarterly revenue increase since becoming a public company in 2004 and projected the sales gain would be even less in the current quarter ending in January 2023.

Compounding the difficulties for the San Francisco-based company, Salesforce made a surprise announcement Wednesday that co-Chief Executive Officer Bret Taylor would leave at the end of January after just one year sharing CEO duties with Benioff.

Insider earlier reported that some Salesforce employees would be asked to regularly return to the office.

Salesforce in February 2021 put in place a “work from anywhere” policy in which some employees would return to offices one to three days a week and others could remain fully remote. While that policy changed a bit over time, the company in November 2021 formally said it was encouraging employees to return to offices more often, but left the specific details to workplace teams.

And at a company event in New York in June, Benioff said, “Office mandates are never going to work.”