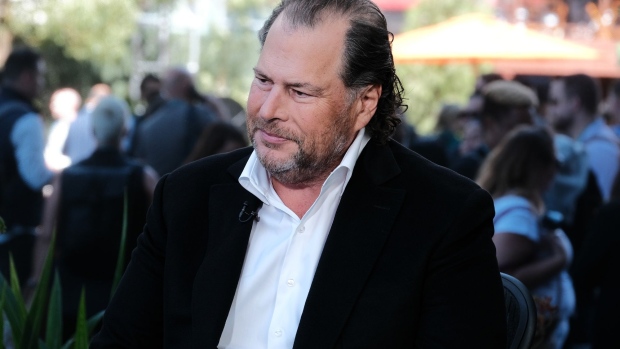 Benioff, who co-founded the software company more than two decades ago, spoke Thursday at a Salesforce conference in New York, his first public event since the surprise announcement last week that co-CEO Bret Taylor would leave the post at the end of January.

Taylor was initially scheduled to share the stage with Benioff, according to promotional materials issued in mid-November. Benioff didn’t acknowledge Taylor’s absence, and a press event scheduled after the speech with the soon-to-be sole CEO was canceled.

Salesforce is grappling with an exodus of top leaders: At least a dozen have announced resignations since October. Days after Taylor’s announcement, three executives from Slack, the business communications platform Salesforce acquired last year for more than $27 billion, said they were departing the company. The exits included Slack co-founder Stewart Butterfield, who was seen as a possible successor to Taylor. Butterfield said his exit was unrelated to Taylor’s departure and long-planned.

Meanwhile, the software company has projected its slowest growth ever and is under pressure from activists including Starboard Value to improve margins. The shares have tumbled 19% since Taylor’s Nov. 30 resignation announcement and have plunged 49% this year.

The event in New York is an example of the promotional spending that Salesforce is famous for, and may need to scale back to improve margins. Benioff’s keynote was preceded by an appearance by New York City Mayor Eric Adams, and a television commercial featuring Matthew McConaughey. “We’re known for our towers, we’re known for our events,” Taylor said last year in an interview with Greylock Partners.

Franklin, the CMO, told a group of reporters that Salesforce isn’t planning to reduce the number of events as a cost-cutting measure. She added that many aspects of conferences such as Dreamforce are sponsored, and the company is looking to boost that mix. Franklin acknowledged that customers have been asking about Taylor’s departure.

A demonstration during Benioff’s speech highlighted that it will now be easier to use Tableau, a data visualization program acquired in 2019 for nearly $14 billion, to view information stored in other Salesforce services. Much of Tableau’s leadership team has been gutted this year — last week, CEO Mark Nelson stepped down, about a year and a half after the resignation of its previous leader, Adam Selipsky.

(Updates with comments from chief marketing officer in the eighth paragraph.)