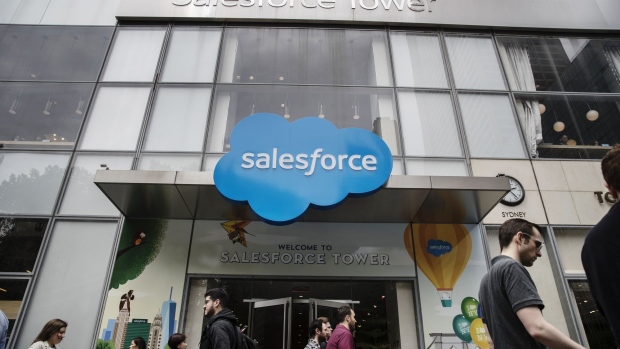 Pedestrians pass in front of the Salesforce Tower in New York, U.S., on Thursday, May 30, 2019. Salesforce.com Inc. is scheduled to release earnings figures on June 4. , Bloomberg

(Bloomberg) -- Salesforce.com Inc. appears poised to escape a lawsuit brought by 90 women who accused it of facilitating sex-trafficking through its work with the now-defunct Backpage web portal.

A state judge in San Francisco tentatively ruled Friday that the women’s claims were barred by a federal law that holds operators of internet services blameless for content posted by third parties.

The women, identified in the lawsuit as Jane Does, described themselves as survivors of sex trafficking on Backpage. They accused Salesforce of aiding in their explotation by providing Backpage with computer services, including customized database tools and credit card processing.

Backpage was a large internet portal where users bought and sold -- it was known as the Craigslist of sex -- and was the subject of numerous investigations of sex trafficking before being shut down by federal officials in April 2018.

In his tentative ruling, San Francisco Superior Court Judge Ethan Schulman cited the Communications Decency Act as the reason for dismissing the suit. The act essentially says that internet services, like Facebook and Twitter, are not publishers and therefore can’t be held liable for what’s posted on their platforms by users.

The lawyer for the women who filed the suit said she would ask the judge at a hearing Monday to reverse his ruling.

“We are not attempting to treat Salesforce as a publisher,” said Annie McAdams. “We are making allegations that they helped build Backpage. We are saying that without Salesforce, Backpage wouldn’t have been able to operate.”

To contact the reporter on this story: Robert Burnson in San Francisco at rburnson@bloomberg.net