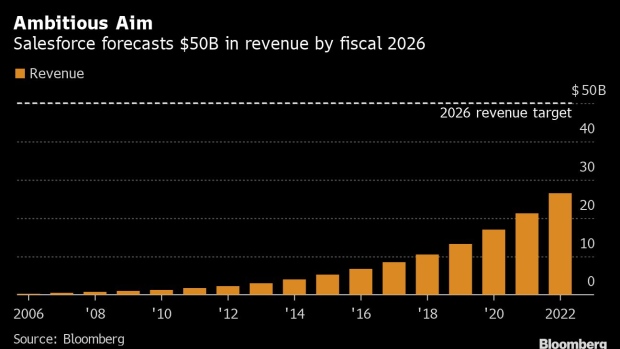 Marc Benioff, billionaire and chief executive officer of Salesforce.com Inc., during a panel session on day two of the World Economic Forum (WEF) in Davos, Switzerland, on Tuesday, May 24, 2022. The annual Davos gathering of political leaders, top executives and celebrities runs from May 22 to 26. , Bloomberg

The customer-relations software giant is aiming to improve its margins as economic sentiment has soured. The company reaffirmed its target of $50 billion revenue by fiscal year 2026 -- nearly double its current annual sales -- while adding a new profit margin target of 25% during an investor event Wednesday. “Now we want to have very strong margins,” Benioff said.

Like many of its tech peers, the company has tightened its spending on hiring and travel after growing its workforce through the pandemic. “We all invested aggressively in the last two years, and we are absorbing those investments into our business,” Benioff said. Further reductions of investment in the workforce are “certainty not our intention,” he said

The co-founder and board chair has shared chief executive officer duties with Bret Taylor for nearly a year since the product leader was promoted to share the top job in November 2021. Benioff called Taylor a “fantastic leader of the company.”

For more on Co-CEO Bret Taylor

Benioff said he will stick to his joint CEO duties “as long as everybody wants me to do it,” he said. “So far it seems to be working.”