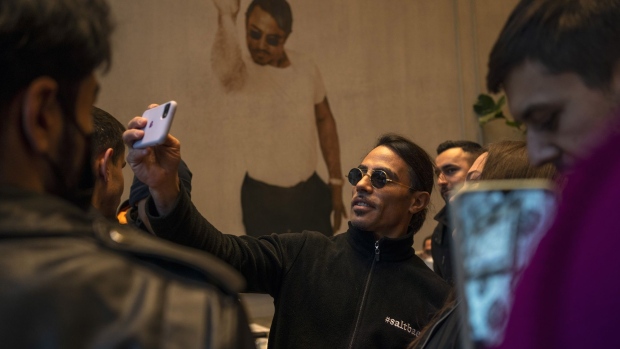 (Bloomberg) -- Many London restaurants may be struggling, but in just four months the Nusr-Et steakhouse sold £7 Million ($8.5 million) of beef, drinks and more.

The Knightsbridge restaurant, a stone’s throw from the hedge fund corridors of Mayfair, is equally well known for its founder, social media star butcher Salt Bae (whose given name is Nusret Gökçe), and its high-priced entrees. The earnings report, filed by the restaurant owners Nusret UK Limited, showed that the company made a profit of £2.24 million during that time period.

Dishes include beef carpaccio for £35 and sirt, or marbled wagyu tenderloin, that ranges in price from £180 to £270. The notorious gold-covered tomahawk chop costs more than £600.

Salt Bae isn’t involved in the London restaurant, which ranks number 258 out of 259 steakhouses in London on Tripadvisor. He left a few months after it opened amid reports of outrageous prices. In fact, controversy has followed many Salt Bae restaurants. Soon after the chef opened his restaurant in New York City in 2018, the health department ordered him to wear gloves when he acted out his signature, table-side salt sprinkle on top of steaks. In Boston, his site was shut down less than a week after opening over alleged violations.

Earlier this year, the owner of the Nusr-Et chain, the D.ream Group, sought to sell a stakes in the company to Qatar Investment Authority. The deal would have put the company’s valuation at $1.5 billion.

The Nusr-Et steakhouse profits news comes as restaurants around the country struggle with problems like inflation and staff shortages. Earlier this year, as Covid-related support for businesses ended, more than 1,300 restaurants in Britain shut down from the 12-month time period ending March 2022, a 4% rise from a year earlier.