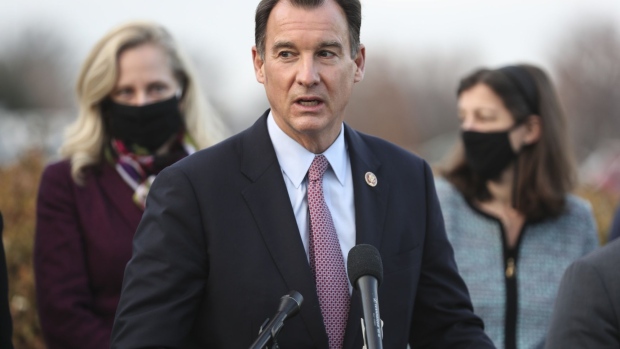 Representative Tom Suozzi, a Democrat from New York, speaks during a news conference with members of the Problem Solvers Caucus at the U.S. Capitol in Washington, D.C., U.S., on Monday, Dec. 21, 2020. The House and Senate are set to vote today on a roughly $900 billion pandemic relief bill to bolster the U.S. economy amid the continued coronavirus pandemic that would be the second-biggest economic rescue measure in the nation’s history. , Bloomberg

Suozzi, who has represented Long Island and parts of Queens since 2017, is leading a drive in Congress by a group of lawmakers from New York and other high-tax states to raise the $10,000 cap on state and local tax deductions, known as SALT, as part of legislation to enact President Joe Biden’s economic agenda.

Suozzi portrayed himself as “a common sense Democrat” in announcing his bid. He said property and income taxes in New York are too high and that the state had to address rising crime.

“I have a proven record of executive experience,” Suozzi said at a news conference Monday. “I’ve got the background and proven ability to do this job.”

The primary is scheduled for next June. A recent poll of likely Democratic voters by the progressive group Data for Progress found that Hochul leads the field of candidates with 36% support, followed by James with 22% in a potential primary match-up. Suozzi drew 6% support in the poll conducted Nov. 16-17. Cuomo, who stepped down after sexual harassment allegations, isn’t legally barred from running again and drew 15%.

Suozzi previously sought the Democratic nomination for governor in 2006, but was defeated by Eliot Spitzer. He becomes the 18th incumbent House Democrat to announce plans to leave Congress, either to retire or to run for other public offices. He joins fellow Democrat Charlie Crist of Florida in running for governor of their states.

New York Representative Lee Zeldin also has said he won’t seek re-election to the House in order to run for the Republican nomination for governor.

(Updates with remarks from announcement beginning in first paragraph)