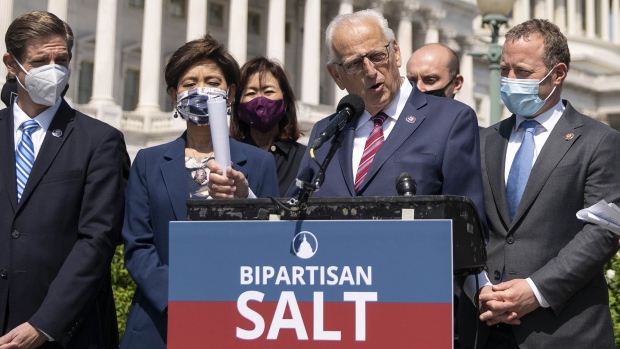 Bill Pascrell, a Democrat from New Jersey, speaks during a news conference announcing the State and Local Taxes (SALT) Caucus outside the U.S. Capitol in Washington, D.C., on April 15. , Photographer: Sarah Silbiger/Bloomberg

(Bloomberg) -- House Democrats are considering a two-year repeal as one of their potential paths to undoing the $10,000 cap on the federal deduction for state and local taxes.

Senior Ways and Means Committee Democrat Bill Pascrell of New Jersey said the temporary rollback is one of the “main considerations” before the Democratic caucus now.

“There’s no final decision,” Pascrell said. “It is a working project.”

The discussions on how to deal with the SALT cap comes as lawmakers from high-tax states warn Speaker Nancy Pelosi they would withhold support for other parts of Joe Biden’s economic agenda unless the deduction limit is lifted or modified.

The Ways and Means committee did not include a specific strategy for the SALT deduction in its tax plan released Monday to help pay for Biden’s agenda. But Chairman Richard Neal of Massachusetts joined Pascrell and Tom Suozzi of New York in releasing a statement that the SALT cap would be addressed in the legislative process later on.

The committee on Tuesday was meeting to finalize details of the bill, intending to send that to the House Budget Committee by Wednesday.

Pascrell and Representative Don Beyer of Virginia said Tuesday that SALT language could be inserted into the $3.5 trillion reconciliation bill that carries the far-ranging climate and social programs of Biden’s agenda during a House Rules Committee meeting.

One aide also has said there are discussions of making the SALT-relief an amendment to that bill that would be taken to the floor for a vote.

Another aide said House Democratic leaders plan to get feedback from the whole Democratic caucus before deciding precisely how to move forward.

Suozzi and others have called the SALT limit enacted in the Republican’s 2017 tax law “short-sighted” and unfair to high-tax states like New York, New Jersey and California.

In 2019 Suozzi sponsored legislation that aimed to double the cap to $20,000 that year for married couples filing jointly, then temporarily repeal the cap for the following two years. Those changes would only have applied to people making under $100 million a year.

Restoring the full SALT deduction would cost the U.S. Treasury $88.7 billion in lost revenue for 2021 alone, according to the Joint Committee on Taxation. A multiyear repeal would cost considerably more, eating into resources that some Democrats would like to spend on other priorities.

But New York Representative Alexandria Ocasio-Cortez of New York and some other party progressives have called the SALT deduction a give-away to the rich because most of the benefits flow to high-income households.