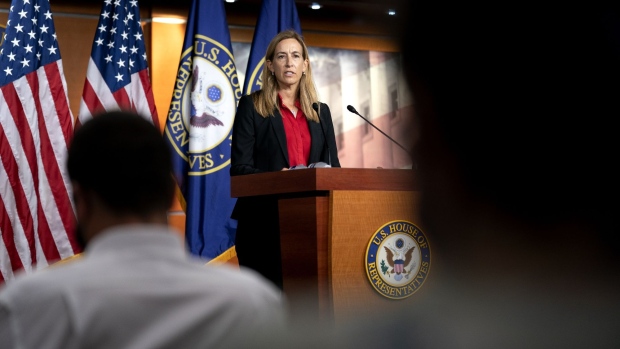 Representative Mikie Sherrill, a Democrat from New Jersey, speaks during a news conference at the U.S. Capitol in Washington, D.C., U.S., on Tuesday, Aug. 24, 2021. The House adopted a $3.5 trillion budget resolution after a White House pressure campaign and assurances from Speaker Pelosi helped unite fractious Democrats to move ahead on the core of President Bidens economic agenda. , Bloomberg

(Bloomberg) -- The House Democrats who had threatened to block President Joe Biden’s tax and climate plan unless it also expanded the deduction for state and local taxes are now signaling they’ll back the legislation when it comes up for a vote later this week.

Representatives Josh Gottheimer, Tom Suozzi and Mikie Sherrill, who have led efforts for months to include an increase to the $10,000 cap on deductions for state and local tax, or SALT, said they will vote for the tax and climate bill passed by the Senate on Sunday even though it doesn’t address the write-off.

“Because this legislation does not raise taxes on families in my district, but in fact significantly lowers their costs, I will be voting for it,” Sherrill of New Jersey said in a statement.

Gottheimer, also of New Jersey, said that his “line in the sand remains the same” on SALT, and he will insist that it is included in any future bill that would increase taxes for households in his district. New York’s Suozzi also supports the bill.

The lack of opposition from the self-dubbed “No SALT, no deal” caucus eliminates nearly all doubt that House Democrats will pass the legislation. Progressive Democrats, who had been pressing for more aggressive measures on climate also have indicated they’ll back the $437 billion package.

The House is scheduled to return to Washington on Friday to vote on the bill that Democrats have named the Inflation Reduction Act.

The Senate-passed bill included several business tax increases, including a 15% minimum tax on corporations, a stock buyback tax and an extension of a provision that limits how much in losses passthrough entities can write off in a given year. Senators Joe Manchin of West Virginia and Kyrsten Sinema of Arizona, the moderate Democrats who shaped much of the bill, rejected many of the tax proposals initially made by Biden.

For months, Democrats pushing for SALT had threatened to tank the bill if it failed to include the valuable tax break, which largely benefits residents of high-tax states in the Northeast and West Coast. The House passed a version of the bill last year that raised the deduction cap to $80,000 from $10,000 per household. However, after much of the bill was stripped to win over Sinema and Manchin, Democrats were essentially forced to accept the legislation as-is.

Republicans instituted the SALT cap as part of their tax bill. But they are now using the failure to secure an expansion to attack House Democrats in swing districts, including Gottheimer and Representative Tom Malinowski of New Jersey.  Samantha Bullock, a spokeswoman House Republican’s campaign arm, said in a statement Monday that the two lawmakers “caved” and are beholden to Democratic leaders in Washington.

SALT played a large role in the 2018 mid-terms. Several Republicans representing suburbs in Southern California and the New York City-area lost their seats, partially because of anger over the Trump law reducing the tax break. It’s likely be less politically charged this election because Republicans are highly unlikely to revive the tax break if they win control of Congress.

The bill includes a slew of new tax incentives for clean energy, including a revamped electric vehicle credit and tax breaks for home energy efficiency. The legislation would also lower drug prices for Medicare recipients and renews subsidies for Obamacare premiums.

The $10,000 SALT cap was imposed starting in 2018 as a way to pay for some of the levy cuts in former President Donald Trump’s tax cut law. Democrats say the measure was intended to target voters in states that voted against Trump. The SALT cap expires at the end of 2025, and reverts back to unlimited deductions then, unless Congress passes another law addressing it.

Despite failing to secure a SALT expansion in the bill, Democrats were able to dodge an amendment that would have kept the cap in place for longer. Some Democrats joined with Republicans to pass an amendment to the bill on the Senate floor that created carve-out for private equity companies in the corporate minimum tax, a change that was paid for by extending the SALT cap to the end of 2026. Democrats then passed a separate amendment that replaced the SALT cap extension to instead extend a tax restriction on pass-through businesses.