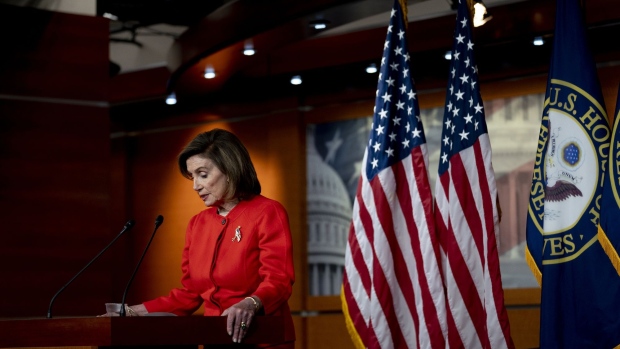 (Bloomberg) -- President Joe Biden’s economic agenda risks faltering in the House unless the final bill includes a large expansion of the state and local tax deduction, some House Democrats from high-tax areas have warned their Senate colleagues.

The House-passed version of the Build Back Better Act expanded the cap of the state and local tax, or SALT, deduction to $80,000 from $10,000. Senate Democrats said that would provide too large a tax cut for the wealthy and want to scale back the write-off, though senators haven’t agreed on the details.

The House will vote again on the bill after the Senate makes changes and passes its own version. Speaker Nancy Pelosi can only afford to lose three Democratic votes if all Republicans vote, as expected, against the tax and spending package.

“They’re going to have to make us happy in the process,” Representative Tom Suozzi of New York told reporters Wednesday. “The bottom line is that we want to get this done. And we need cooperation from our friends in the Senate.”

“We are happy to help our Senate friends with the understanding that there is no bill that is going to pass through the House without SALT,” Representative Mikie Sherrill of New Jersey added.

House lawmakers advocating an expansion of the tax break have repeatedly said they won’t negotiate in the press and have not weighed in directly on the plans currently under consideration in the Senate.

The debate about how to address SALT in Biden’s economic agenda has been a fraught issue from the beginning. President Donald Trump limited the break to $10,000 per taxpayer in his 2017 tax law. Many Democrats since then have been seeking to expand the tax break, which is particularly valuable in high-tax areas in the Northeast and West Coast.

Some Democrats, however, have criticized a more generous tax break. Representative Alexandria Ocasio-Cortez and Senator Bernie Sanders have warned that too much SALT relief would give tax cuts to millionaires and billionaires. Sanders, a Vermont independent who caucuses with Democrats, is negotiating changes to the House’s SALT plan.

Sanders has called to limit SALT deductions larger than $10,000 to those earning up to $400,000 and phasing down the tax breaks above that income level. Senator Bob Menendez, a New Jersey Democrat, has been pushing for a more generous tax break that would allow single filers making $550,000 and couples making up to roughly $950,000 to write off all their SALT.

“Whatever they do over there, there’s gonna be a recognition of reality,” House Ways and Means Committee Chairman Richard Neal said Wednesday. “You cannot do a final package without some SALT relief.”

Senate Majority Leader Chuck Schumer has said he wants to pass the legislation by Christmas. That could be a tough deadline for lawmakers to meet as they work to resolve several outstanding issues including SALT, immigration measures, paid leave and other unsettled matters.