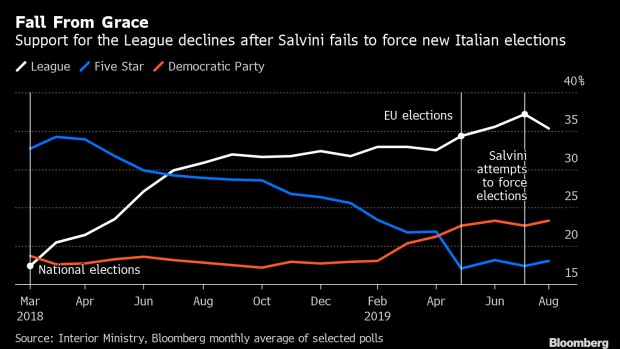 (Bloomberg) -- Matteo Salvini’s failed attempt to force snap elections and take “full control” of Italy’s government has not only ushered in an unlikely alliance between two former rivals, it’s also starting to dent his stellar poll ratings. His League party lost 1.9 percentage points in August compared to July, the biggest monthly drop since the series started in June 2014, according to Bloomberg calculations. And the trend seems to be accelerating: in the last week of August the League lost 2.8 percentage points on weekly basis.

To contact the reporter on this story: Giovanni Salzano in Rome at gsalzano@bloomberg.net

To contact the editors responsible for this story: Alessandro Speciale at aspeciale@bloomberg.net, Zoe Schneeweiss