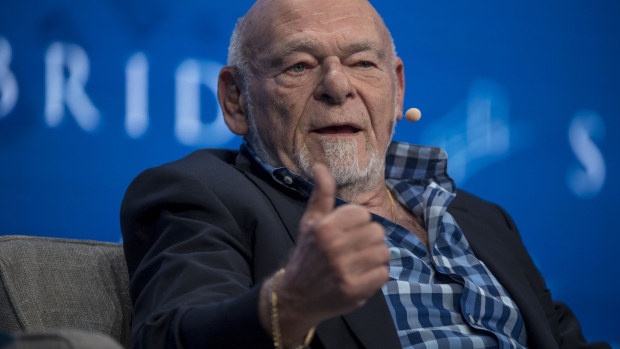 (Bloomberg) -- Billionaire investor Sam Zell is seeing inflation everywhere, and has bought gold as a hedge -- something he says he used to knock others for doing.

“Obviously one of the natural reactions is to buy gold, he said in a Bloomberg Television interview. “It feels very funny because I’ve spent my career talking about why would you want to own gold? It has no income, it costs to store. And yet, when you see the debasement of the currency, you say, what am I going to hold on to?”

Zell, 79, said he’s concerned not only about the U.S. dollar but other countries printing money as well, and questioned whether inflation will be transitory, as Federal Reserve Chairman Jerome Powell indicated last week.

“Oh boy, we’re seeing it all over the place,” Zell said of inflation. “You read about lumber prices, but we’re seeing it in all of our businesses. The obvious bottlenecks in the supply chain arena are pushing up prices. It’s very reminiscent of the 70s.”

While gold is an attractive investment, opportunities in fossil fuels are not, said Zell, who in 2019 agreed to set up a joint venture with Tom Barrack Jr.’s Colony Capital Inc. to invest in oil and gas.

“Right now, oil and gas is not priced to reflect the risk of what’s going on, whether it be in the EV world, a climate changed world,” he said. “As recently as a couple of years ago I thought the risk-reward ratio was appropriate. It’s clearly become very inappropriate as our political situation has changed.”

Zell also said he’s concerned about renewable energy undermining the reliability of power grids, pointing to the recent blackouts in California and Texas.

In real estate, there are plenty of questions about what demand will look like over the next couple years in the office, lodging and retail sectors, Zell also said in the interview.

“Everybody’s worried about going back to work and office-space occupancy. I don’t think that’s really an issue,” he said. “The problem is that, before the pandemic, we were dealing with an oversupply of office space. Obviously the pandemic hasn’t reduced that oversupply and has probably encouraged it accordingly.”

Stores also present challenges, he said, given that the U.S. already had more retail space per person than the rest of the world before Covid-19, and shoppers increased their reliance on e-commerce while stuck at home during the pandemic.

“Street retail today is like a falling knife, and you don’t know how far it goes down,” he said. While that “doesn’t mean the best malls aren’t going to perform,” there’s a “huge amount of real estate that’s going to have to be reprogrammed in one form or another.”

The challenges faced by hotels are more of a temporary problem over the next three to four years, Zell said. “We will see a slow recovery in business travel,” he said. “In the interim period of time, it’d going to be a slow recovery, and hotels are big overhead things and running them at less-than-optimum occupancy is a very expensive scenario.”