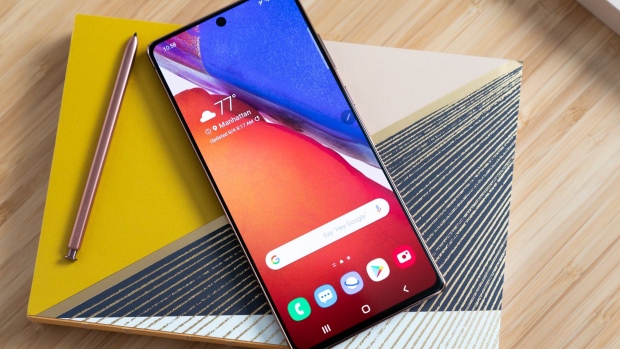 Samsung Electronics Co. set out its premium Android device lineup for the rest of the year with the launch of the Galaxy Note 20 series and a teaser for the upcoming Galaxy Z Fold 2 foldable in its first virtual launch event.

Having lost the crown of world’s biggest smartphone maker to Huawei Technologies Co. in the second quarter and seen the coronavirus pandemic drive customers to cheaper devices, the company’s betting on a refresh of its entire ecosystem of products to reignite interest.

Led by the 6.9-inch Galaxy Note 20 Ultra, Samsung’s new portfolio echoes close rival Apple Inc.’s by centering a large-screen, high-spec smartphone in an ecosystem that includes a smartwatch, true wireless earbuds and a choice of tablets for work and play.

The Samsung difference is that it’s putting 5G networking on its phones and tablets and also expanding its range with the foldable Galaxy Z Fold 2, which is yet to be fully detailed, and the US$1,450 Galaxy Z Flip 5G, announced in July.

The Ultra edition of the Note 20 starts at US$1,299.99 and includes a 108-megapixel camera, Samsung’s most-advanced displays with faster touch responsiveness and animations, 12GB of memory and up to half a terabyte of expandable storage.

Samsung’s new wireless earphones, called the Galaxy Buds Live, will be on sale Aug. 6 for US$169.99, featuring a distinctive bean-shaped design and active noise cancellation -- taking on Apple’s AirPods Pro in a market that still has ample room to grow.

Available at the same time and fleshing out Samsung’s wearable proposition is the Galaxy Watch 3, which starts at US$399.99 without a cellular connection or US$449.99 with LTE. And the new Galaxy Tab S7 devices, Samsung’s answer to the iPad, cost US$649.99 and up and will arrive later in the fall.

The Galaxy Z Fold 2 is the successor to Samsung’s first foldable device, which came out in 2019, but only after a delay following design defects. Samsung has made significant improvements in the interim, showing off a nearly bezel-less 7.6-inch interior screen on the new device and a 6.2-inch display on the exterior that makes the Z Fold 2 function much more like a phone.

There will be a limited Thom Browne edition of the device, extending the partnership with the New York designer that started with the Z Flip earlier this year.

Samsung’s latest premium lineup comes at a time when the industry is gauging consumer sentiment in the wake of the coronavirus outbreak and its economic fallout. The company’s Galaxy S20 series, launched at the start of the year, suffered a sales slump due to global lockdowns and plant shutdowns.

Smartphone sales have shown signs of recovery, but those have largely been contained to the budget segment that includes the iPhone SE, Galaxy A series and low-end to mid-range phones from Chinese vendors. The competition around 5G smartphones will likely intensify once Apple enters the fray with its iPhone 12 later in the year.

“The pandemic doesn’t exactly create a fertile environment for the launch of ultra-premium phones nor wearable devices,” said Bryan Ma, vice president of research at IDC. “This is not only due to the lingering economic uncertainty, but also in that these devices need to be seen and touched in physical retail stores.”

Extending its partnership with Microsoft Corp., Samsung will offer the streaming of more than 100 Xbox games direct to Samsung phones and tablets from Sept. 15. That will be under the Xbox Game Pass Ultimate subscription and Samsung is preparing to sell a bundle that includes a Bluetooth wireless controller.

In another effort to build out a more cohesive ecosystem, Samsung has added wireless file transfer to the Galaxy Note 20 Ultra that works by just pointing it at compatible devices. Samsung said it plans to expand that functionality to include augmented-reality guidance to help users find things like their keys more easily or replace them altogether by using the technology to lock and unlock their home digitally.

Customers will be able to pre-order the Galaxy Note 20 series from Aug. 6 and receive credit toward buying accessories or other Samsung services.